The land of ice (storms) and snow (geese)

For a birder from southern Ontario, Eastern Ontario is a very different place and since Erica's family is from that area I get to explore the birding there pretty regularly.  One of my regular spots I like to check when I have time is the Long Sault Parkway.  The eBird barchart has 199 species listed, which especially when you consider it is situated in a part of Ontario that is pretty under-birded, is pretty impressive.  The best bird I saw on the list was Jacob Bruxer's Western Grebe that he found earlier this fall.  There was also a Scissor-tailed Flycatcher back in 2009.  The best thing I have been lucky enough to see was a Eurasian Wigeon a few years ago that had been found earlier.

It is a really neat causway that connects something like a dozen islands over a 10km stretch of road.  There are lots of places to park your car and have a picnic and there are even some camping spots along the way.  I usually only ever get there in the waterfowl season but I imagine it would be a pretty good spot for passerine migration too.

Anyways, while visiting for Christmas I made a quick trip there are on the 23rd.  Here's my full list.  It was fairly slow, with lots of ice building since my last visit on December 9. The best thing I found was a group of 51 Snow Geese mixed in with the Canadas right at the Long Sault end of the Parkway.

On December 9, I captured this pair of Common Loons in nice and close:


Snow Geese are definitely one of the birds I think of when I think of eastern Ontario with the massive migration of Greater Snow Geese passing through each year.  The other eastern Ontario specialty is Gray Partridge.  Even saying that I had only found Gray Partridge once before while visiting Erica's family.  That was a pair of birds seen in the field across from her parent's house on March 21 of last year.  Erica's Dad lets me know whenever he sees them which is still pretty infrequent. However, this morning we went for a cross country ski around the fields and found some pretty fresh tracks in the snow that I was pretty confident were Gray Partridge. I started following them and it was clear that they were enjoying the leftover soybeans in the field.  A few minutes later I put up a group of 11 of them!  They flew across the road so on our way out an hour or so later Erica and I took a detour to see if we could find them for a photo.  We were in luck as they were busy foraging in a corn stubble field. This was the first time I have actually heard Gray Partridge. 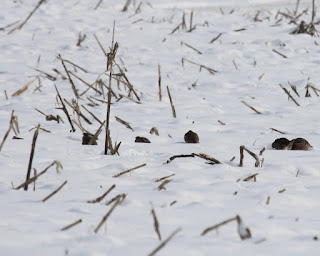 I also took a quick video of them. Unfortunately as soon as I stopped recording the flock got up and flew a short distance and started making all sorts of noise...
In case you are interested in the exact spot where they were, here is our eBird checklist.

And here's a link to the eBird map of Gray Partridge in Ontario.

On the way east on Saturday we had to stop in Kingston for a few things so instead of actually setting foot in a mall I went around back to check out the long-staying Northern Mockingbird, which is a pretty good Kingston bird. 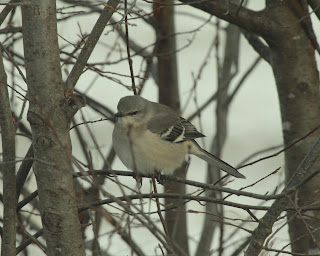 Posted by Mike Burrell at 17:41 No comments:

I'm just going to ignore the fact that it has been a while and jump right into this post. As you all know we are now well into Christmas Bird Count season and we've had the big weekend of counts done and starting to post the results.  So far there are lots of pretty apparent trends out there in southern Ontario: lots of lingering waterfowl, some lingering Ruby-crowned Kinglets and Warblers, lots of Barred Owls south of normal, and pretty much no Robins.  Most of the winter finches, with the exception of redpolls, appear to have motored right on through Ontario.

As usual I was out for two counts this past weekend and wasn't disappointed.  Saturday's count was the Kitchener CBC.  For this count we cover the area west of Erbsville which has a lot of nice forest.  What it doesn't have is any water to speak of so unlike some other areas we didn't see too much of interest this year.  Our best bird was probably the Swamp Sparrow in the wetland behind the old Erbsville Outdoor Education Centre.  Here's our day's list if you're interested.

Despite our rather slow day the Kitchener count was a huge success.  When all was said and done all the groups tallied 74 species on count day (beating the old high of 70!) plus 3 more species for count week.  The highlight of count day was the Cackling Goose (new species for count) that has been present for some time now on the sports fields at Columbia Lake.  You can see my summary of the count here. Here's a picture I took of the Cackling Goose on count day while Ken and I poached in Virgil Martin's territory: 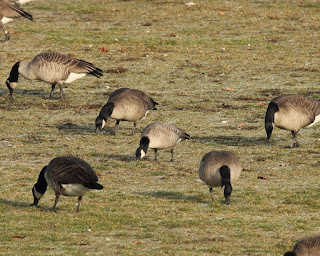 The Cambridge CBC was a completely different story for us.  Since 1994 we have covered the area between Puslinch Lake and Valens Reservoir - in most years it is tough to get even a Canada Goose or Mallard since our's is one of the few sections without part of the Grand River in it and our species total usually suffers because of that.  However, in warm years when Puslinch and Valens have open water (like in 2001 and 2011) our area kicks some serious ass! In 2001 I think Canvasback and Long-tailed Duck were both new for the count.  In 2011 there weren't any new species but we finished with an incredible 52 species for our area. This year was no exception, even though we didn't break the 50 species mark.  I'm pretty sure both the Lesser Scaup and Ruddy Duck were new species for the count and Red-breasted Merganser, Greater Scaup, and the huge count of Hooded Mergansers were not too shabby either.  To top it off, Erica and I had a Barred Owl in our area on Friday night (count week)! It was a pretty rainy day on Sunday for the Cambridge count so not many pictures taken, but here are a couple: