This morning I got a text message from Mark Read, who collects bird sightings for the Kingston Study Area on behalf of the Kingston Field Naturalists. It had details that a juvenile White Ibis had been seen in Napanee. Re-reading the text now it alludes to the fact that I was expected to already have known about this bird and once I got home and checked the Ontbirds archive I see why - Terry Sprague had reported the details first thing this morning. For some reason his Ontbirds post never made it to my inbox (and not even into my spam folder...strange, but luckily Mark sent me the text...).

Anyways, I jumped in my car and made it to the spot where it had been reported and there it was!
Here's my post to Ontbirds:

Jeff Haffner found a young White Ibis this morning at 7 am in Napanee. I arrived at 935 and found it in roughly the same location. However, while I had my glasses off trying to get a phonescoped photo it disappeared. I didn't see it move but when I couldnt find it in my scope and put my glasses on I couldn't see it. I wasn't looking down for long so I don't think it flew but rather walked around a bend in the creek and out of sight. I did manage a couple photos that I will post on my blog when I get home.
Directions. Get off the 401 at exit 579 and go south to Jim Kimmet blvd and turn right (west). Just before the Wal-mart there is a bridge over the creek. Park before the bridge but be sure not to block the fire hydrant. The bird was north of the bridge in the creek before the bend.
Will post if I can refind it.

I should clarify that it wasn't Jeff Haffner who originally found it. Apparently (according to Terry Sprague) it was Robert Lane who found it on SUNDAY (24 August). I'm kind of glad that I didn't see Terry's post though since it sounded from his message like the bird had disappeared and I might have waited until someone re-found it.


Anyone who has traveled to the US southeast knows that White Ibis are abundant there, so it's always a bit surprising to me that we don't get more of them here, especially given the propensity for northward post-breeding dispersal by herons in general. It seems likely that this bird made its way north on the same system in the last week or so that has brought at least 2 Snowy Egrets, a Eurasian Collared-Dove, a Violet-green Swallow, and an Ash-throated Flycatcher to southern Ontario (not to mention the Yellow-crowned Night-Heron that's still around). What else it lurking out there to find?

Here's my favourite shot of a White Ibis (this is an adult) from a trip to Florida several years ago. I'm still blown away by it!

Yesterday while working away I noticed a Great Blue Heron in the pond I can see from my desk. I quickly noticed it had something in its beak and a look through my binoculars revealed it had caught an Eastern Gartersnake. I grabbed my scope and took a couple shots through my phone: 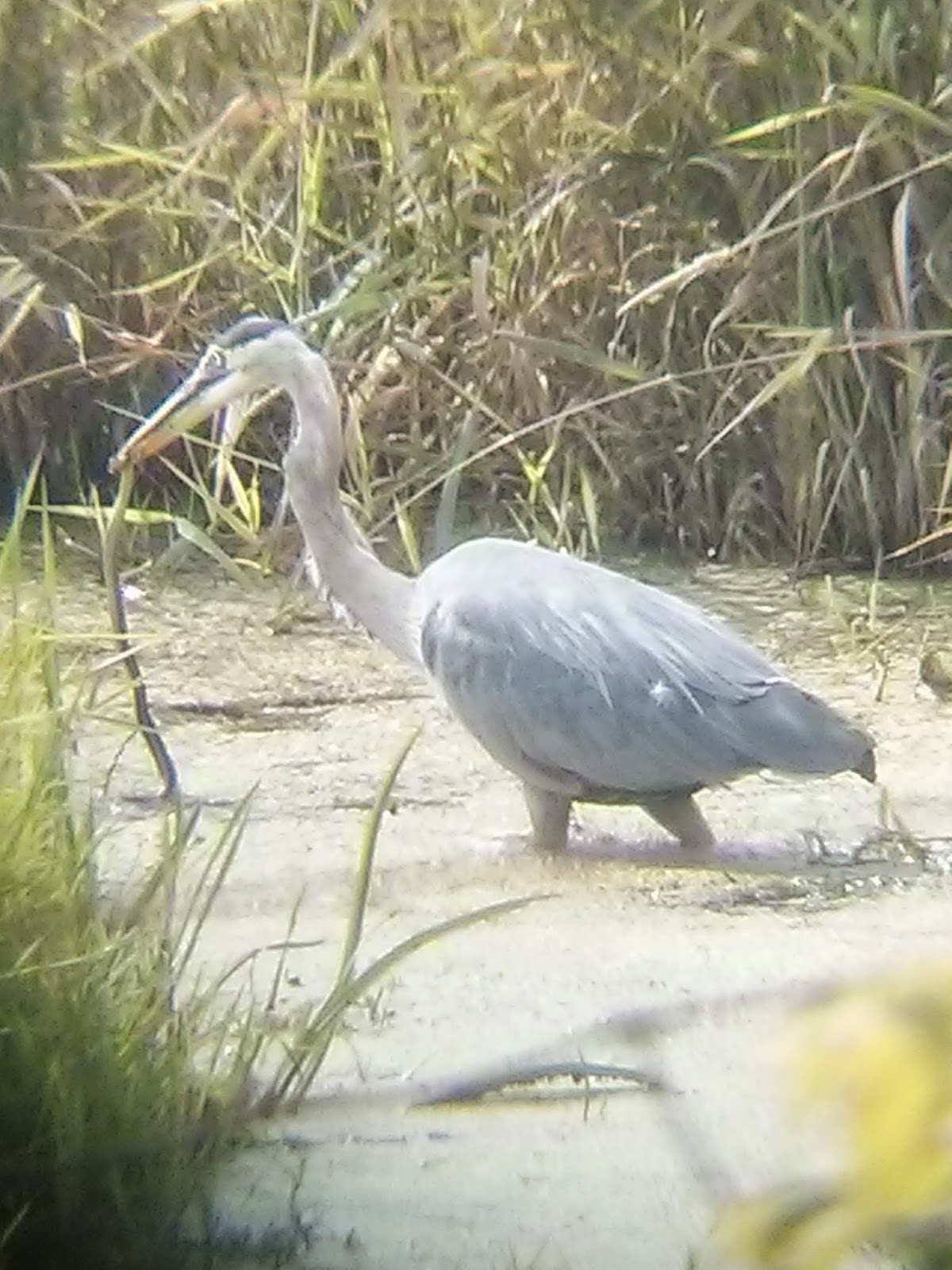 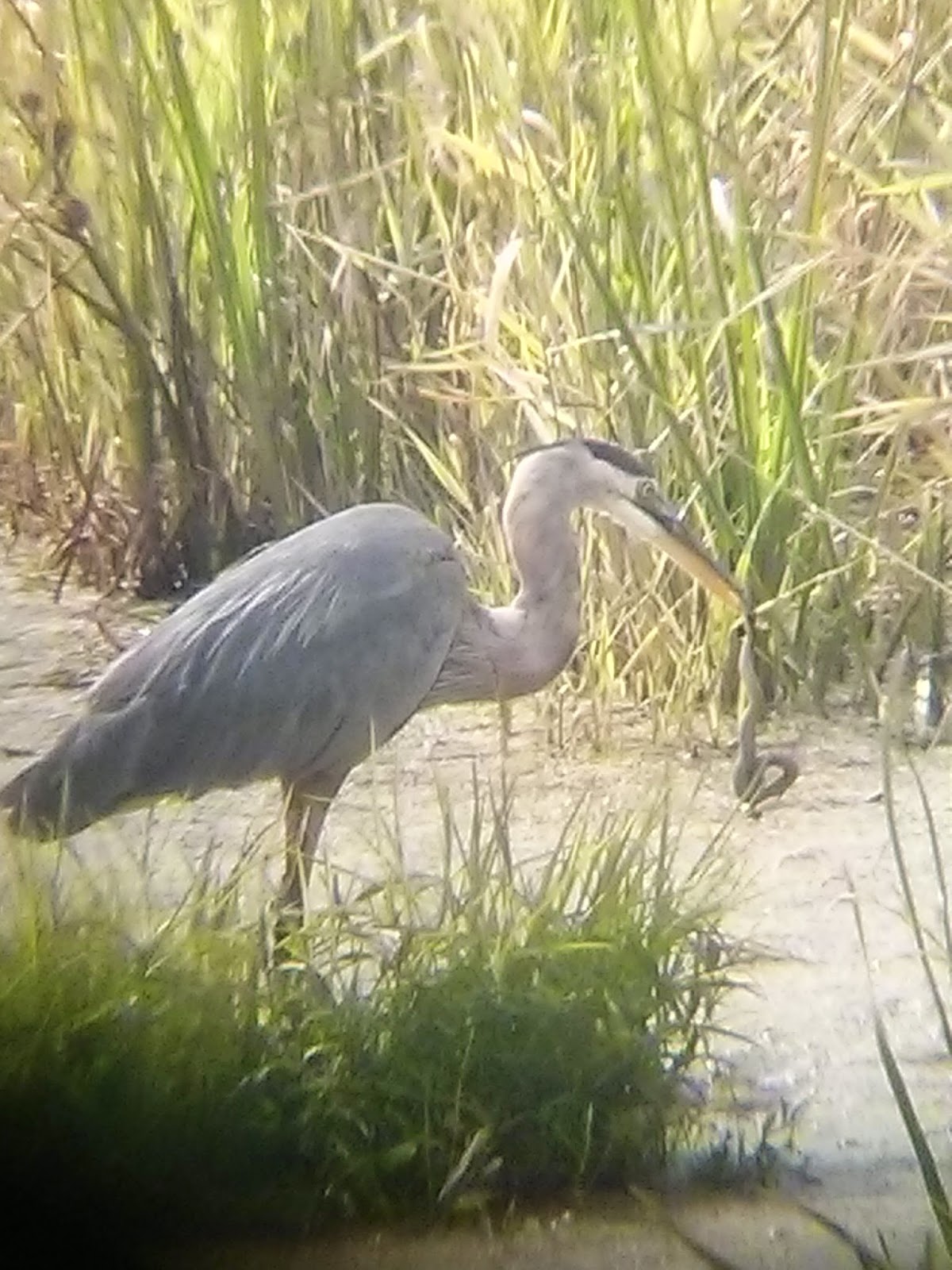 I even managed to catch it on video. I like how once the heron finally gets it into its throat it takes several gulps of water to help wash it down - must be a bit squirmy still!!

The gartersnake isn't the only tasty treat I've seen a Great Blue Heron catch recently. Last week my sister and I watched as a (the same?) Great Blue Heron walked through the pasture across from my house and captured then swallowed a small mammal - possibly a meadow vole.
Posted by Mike Burrell at 08:42 2 comments:

A couple weeks ago when I went to check my black light (for moths) first thing in the morning I noticed a Mantidfly on my trap (that's just a fancy word for a cotton sheet). I got pretty excited because I had only seen two previously, so I carefully moved it onto a more natural background to get some pictures: 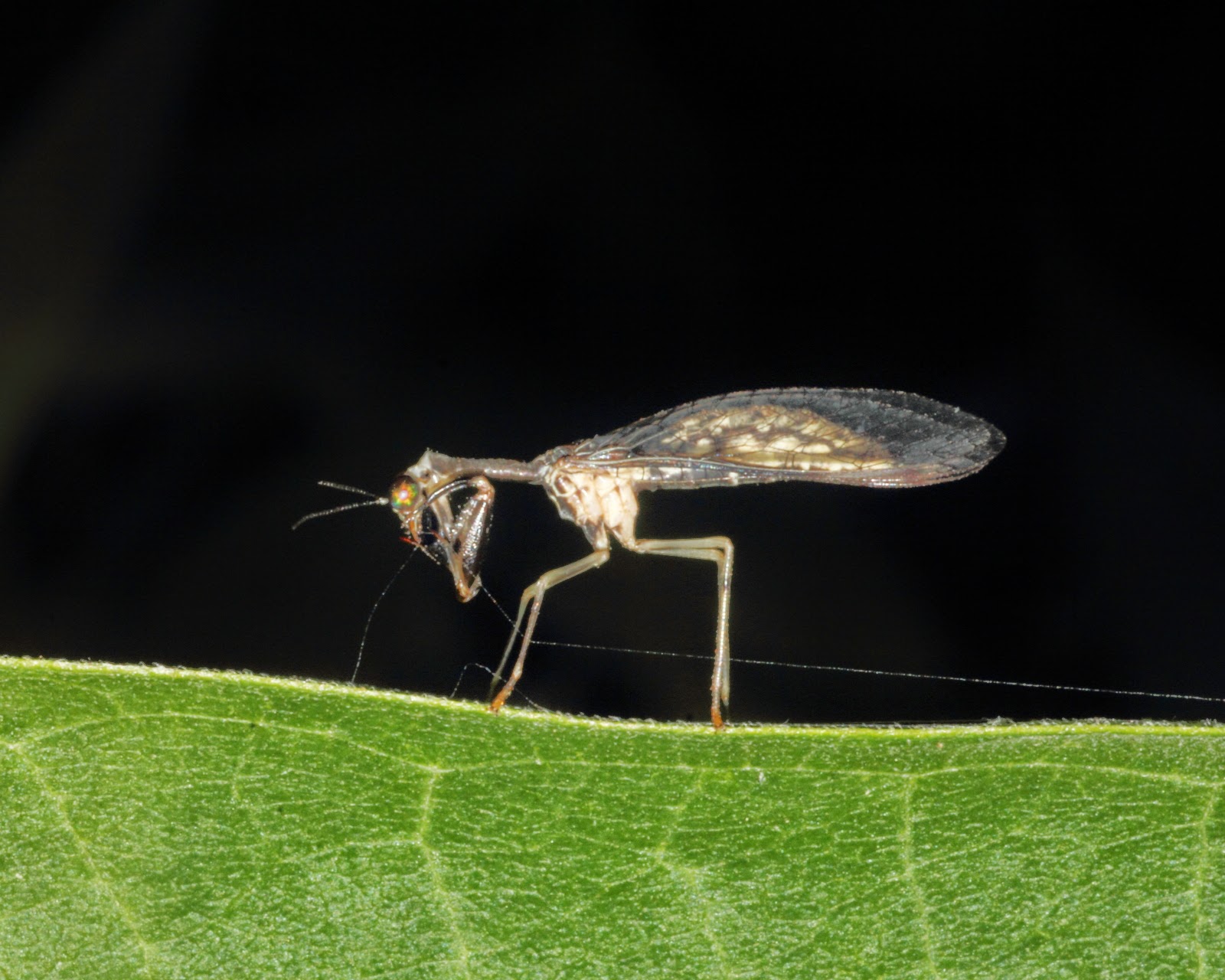 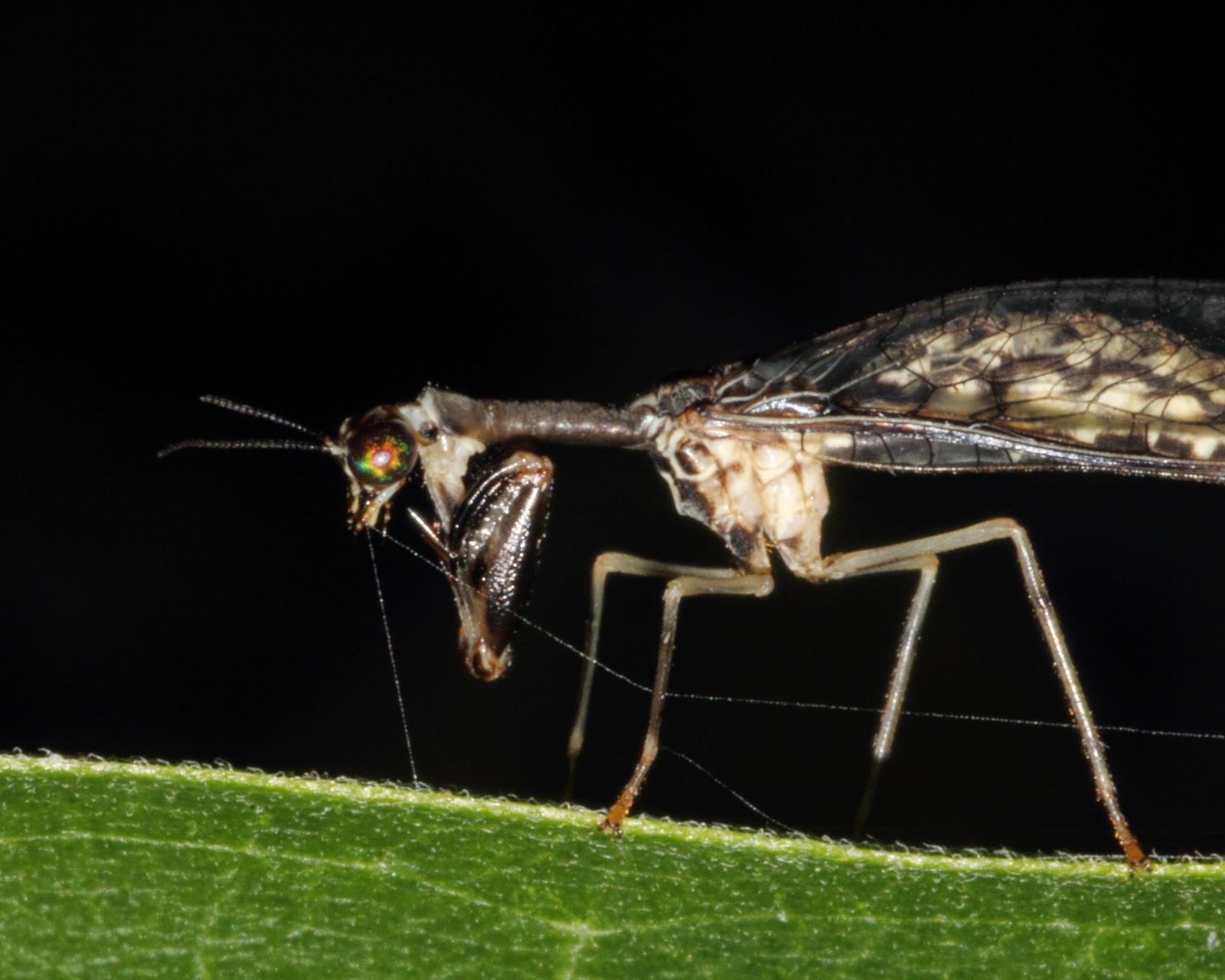 I even remembered to take a video of it (seemed to be preening, possibly trying to rid itself of the piece of spider web). The video is nice because it gives a better sense of its true colours, as it was taken without the use of a flash:

As you can tell, I was pretty excited to find this Mantidfly. In my experience they are a rarely seen insect, but very cool to see. Not only are they bizarre-looking and generally rare or uncommon, they've got a pretty cool life history as well. I didn't know much about them before so did some research and came across this excellent paper by Rob and Syd Cannings. All of the following information comes from this paper and should be credited to the authors, not me.

Like many insects, Mantidflies (Order: Neuroptera; Family: Mantispidae) are at the northern edge of their range in Canada with only four species in all of the country (all of which are found in Ontario). Only one species, Climaciella brunnea (the "Wasp Mantidfly"), is relatively widespread. The Wasp Mantidfly is, you guessed it, a wasp mimic and is the only species I had seen (twice) before in Ontario:
The Wasp Mantidfly is not only the most widespread species but the easiest to identify. It's fairly large and its body is striped brown and yellow similar to that of many species of wasp. The other three Canadian species are quite similar and require very good photos, preferably showing close-ups of the pronotum and the wings. My most recent observation is clearly one of the remaining three and judging from my photos, it looks to me like the pronotum is mostly smooth (lacks "numerous short setae over its entire length") which means it is one of the two Dicromantispa species.

The separation of those two species is done by the presence/absence of dark spots on the "wing tips and some crossveins of radial cells", which my specimen appears to lack. That puts the ID tentatively as Dicromantispa sayi. This is exciting because, according to the paper referenced above, this would be a (known) range extension for the species in Ontario, which, based on examined specimens, was restricted to the north shore of Lake Erie. I'm waiting to hear back from some folks who know more than I do to see if I can get that confirmed or find out more.

As I mentioned earlier, Mantidflies have a pretty cool life history. Their raptorial forearms give them away as predators as adults (feeding on a variety of other insects). As larvae, most develop in spider egg sacs where they feed busily on the individual spider eggs. In some species the larvae actively search out spider eggs sacs, but in others they board adult spiders and enter the egg sac during the construction phase. The eggs are stalked, similar to these Green Lacewing (Chrysopidae) eggs:

Cannings, R.A. and S.G. Cannings. 2006. The Mantispidae (Insecta: Neuroptera) of Canada, with notes on morphology, ecology, and distribution. Canadian Entomologist 138: 531-544.

Update: I received confirmation from Rob Cannings that my identification was correct. Apparently there was also a record of this species near Tweed, Hastings County last summer, so it is probably worth looking for south of the shield in southeastern Ontario.
Posted by Mike Burrell at 09:07 6 comments: