The recent ice storm across eastern Canada has been pretty impressive, making for some really nice scenery with all that build up of ice on everything
All that ice is making for many of power outages and broken branches/trees but it is also tough on birds. Raptors might have trouble getting food underneath the hard crust of ice but it also impacts many other birds in lots of ways.

Mourning Doves are relative newcomers to Ontario from further south. They're not very well adapted for our winter conditions and you often see them with missing toenails due to frost bite. At my feeders many Mourning Doves have damaged tails from the ice: 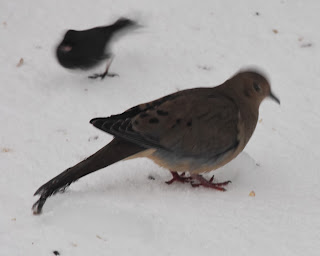 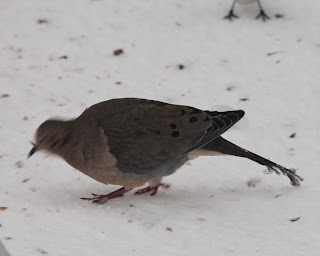 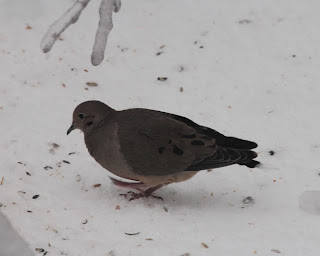 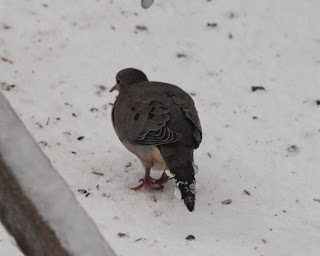 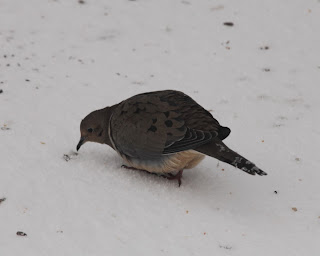 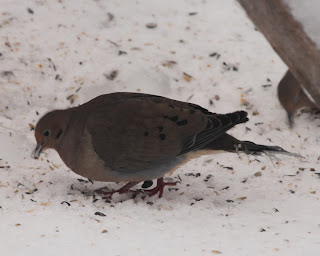 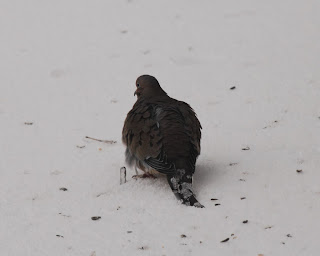 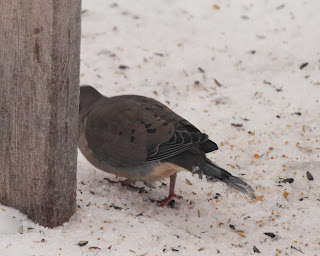 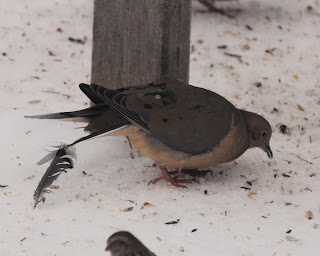 Are you seeing impacts to birds/wildlife from the storm? 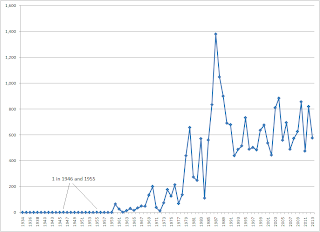 The 79th Kitchener CBC was held, as usual, on the first Saturday of the count period, which fell on December 14, 2013.

A few words about this year’s weather are certainly in order. Unlike the past couple of years, winter certainly arrived well before the count happened. That froze up many bodies of water, including the Grand River in places. The wintery lead-up meant that many species that sometimes linger (especially waterfowl) were non-existent this year. In addition, the actual count day was down-right miserable with 10-20 cm of snow to start the day with another 5-10 cm falling continuously throughout the day. The whole day was cold (low of -13.9° C, “high” of -11.0° C), windy (15-35 km/h out of the southeast), and decidedly wintery-feeling!

The weather on count day had the negative effect of fewer hours spent walking around and more time driving in cars, so species and numbers were undoubtedly missed. Many birds were simply riding out the storm on the day of the count too, making counting them difficult.

As if the weather wasn’t enough, tree seed crops in the boreal forest was excellent this year, so the finches from the north that have been present the last couple years opted to stay north this year.

Still, despite all of the odds stacked against us, 59 species were recorded on count day, just below the twenty-year average of 60. Three additional species were observed during count week (Peregrine Falcon, Merlin, and Swamp Sparrow). 60 field observers and 41 feeder watchers1 logged a record total of just under 190 hours finding 24,618 individuals, pretty much right on the twenty-year average of 24,524.  No new species were added to the official count list. What follows is a list of highs, lows, and unusual species and then the complete list of results for this year’s count.


Thanks to all 101! counters we had helping make this year another success, and to Virgil and Beth Martin for hosting our wrap-up meeting and dinner.

The full results will be available on the KWFN webpage and through the Audubon CBC page.  Next year’s count will be held on December 20, 2013-mark your calendars!

Click here for a map showing the location of the Kitchener Christmas Bird Count.

1 Thanks to an article posted the week before the count in The Record, we had a tremendous response with 33 new feeder counts because of it.

With 79 years of continuous coverage and counting it is very interesting to look at trends in the different species. Keep in mind none of these are adjusted for effort. Here are a few for your viewing pleasure :)

Yesterday afternoon Janice Grant found a Thick-billed Murre on the Kingston waterfront. She called Mark Read who was able to confirm it as a Thick-billed Murre, follow it as it swam east along the lake shore and get a few local birders on it (side note, in two weeks Erica and I will become local birders in Kingston!). Mark posted to Ontbirds late in the day and not surprisingly many birders made plans to be there for first light.

I wasn't one of them because I had a meeting in the morning (which was cancelled due to the weather) but once the freezing rain cleared I made it out to try my luck before working the rest of the day from a local library.  Initially when we arrived my heart dropped a bit because there were only two birders present and all I saw were a couple of Common Loons in the harbour. However, a couple seconds later and I realized I was looking too far away - the bird was only about 20ft from the birders!

Needless to say, great views of this rare bird 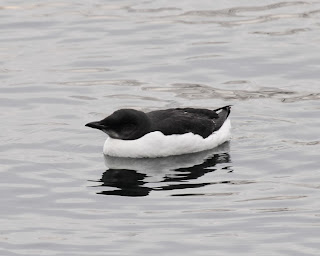 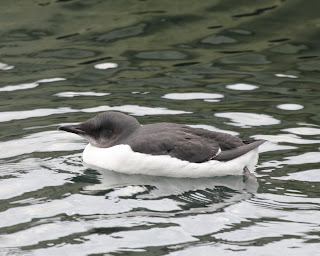 I even took a short video - Erica's commentary sums it up:

Apparently, Thick-billed Murre used to occur semi-regularly on Lake Ontario in late fall/early winter but that hasn't been the case since the 1950s

The Birds of Hamilton by Bob Curry has a good summary of Thick-billed Murre in Ontario listing records from about a dozen years before the mid 1950s, some with fairly extensive "wrecks" of multiple birds.

[EDIT: Thanks to Glenn Coady for the following references if you are interested in Thick-billed Murre history:
Fleming, J.H. 1907. The unusual migration of Brunnich's Murre (Uria lomvia) in eastern North America. Proceedings of the IV International Ornithological Congress, pp. 528-543.

The Ottawa record apparently was originally identified as a Razorbill (pretty easy to do when it isn't at your feet!) and it wasn't realized what it was until the morning of December 6. Since many birders already had Razorbill on their Ontario lists many missed out on this bird even though it was technically chase-able. Even relatively local birders missed this bird for that reason because there was only a couple hours between when its real identity was realized and the time it disappeared [edit - according to an anonymous comment it was killed by a Gyrfalcon!!].
Posted by Mike Burrell at 19:36 4 comments: