Ken and I decided to tour Haldimand County for my birthday yesterday and we had some nice "birthday birds".

We started out right with an eagle flying down the river just south of Caledonia.  We were about to pass it off as a Bald but it seemed a bit fishy so we stopped and sure enough it was a nice Golden Eagle! 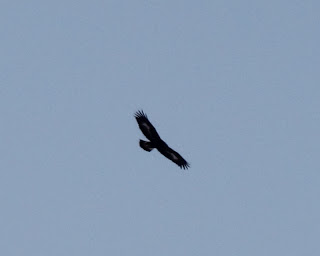 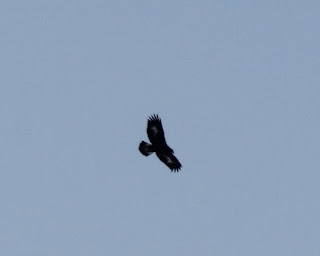 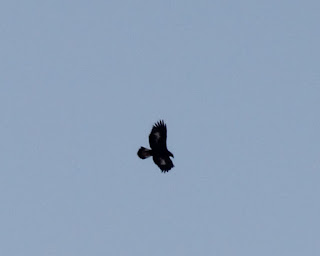 I snapped a couple real distance shots as it slowly worked its way south. We decided to keep going but the eagle caught up with us about a minute later when it flew in and landed in a tree right beside the road! Neither Ken or I could ever remember seeing a Golden Eagle perched in Ontario.  We stopped the car again and tried to get some more pics but it was on the wrong side of the road and as soon as we stopped it took off.  This all happened along Catharine Street between Caledonia and York (see our eBird checklist). 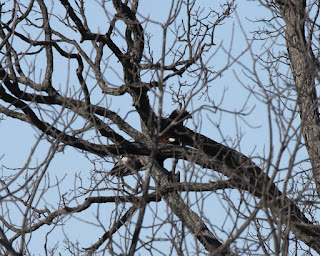 After that we toured some back roads heading towards Dunnville looking for sparrows...we finally picked up some Song Sparrows on the exposed shoulder of River Road south of Caledonia. Our luck improved further just before Port Maitland when we picked up a Savannah Sparrow on another patch of bare grass on the shoulder of the road: 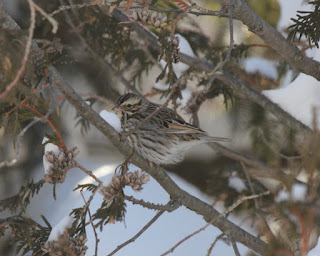 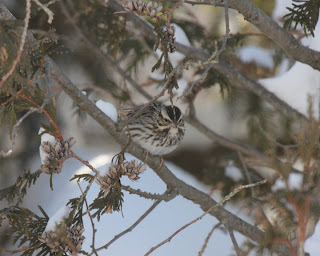 From there we headed west along the lakeshore (the entire river and most of the lake was frozen). It wasn't long before we picked up some more goodies on a road shoulder.  This time it was a flock of 8 Eastern Meadowlarks along Lighthouse Drive just east of Johnson Road: 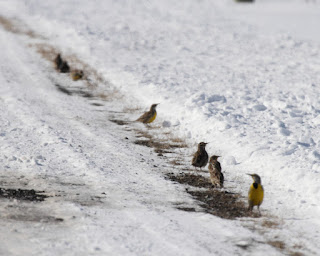 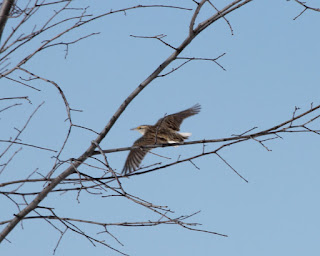 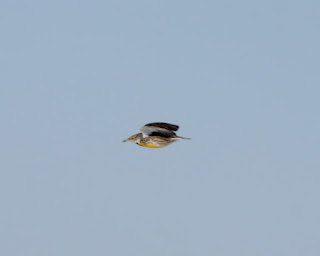 We then got onto Lakeshore Road and in the first stretch we had a whole bunch of goodies.  First, we had a whole FLOCK of Savannah Sparrows, 8 to be exact.  They were mixed in with Song and American Tree Sparrows on a road shoulder (birds were really attracted to bare patches with all the fresh snow) beside house number 2984.  About another 200m down the road another flock of birds was feeding on weed seeds and Ken picked out a classic Hoary Redpoll, sweet Haldimand bird!  And finally, right at the Blue Heron trailer park a beauty adult Red-shouldered Hawk perched obligingly! Here's the eBird checklist from that stretch of road. 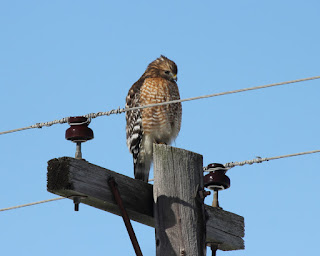 We had one final find left for the day.  As we approached Sweets Corners Road a large flock of geese was milling about an open bay.  We got out the scope and we could see 4 Greater White-fronted Geese at the far west side of the bay!  We drove around to house number 1681 where we had nice looks at them (although they were sleeping).  We got the word out on Ontbirds and the Hamilton Naturalists Club outing to the area picked them up, plus 2 more and a Snow Goose later in the day! Pretty nice end to the day!  Here's our final eBird checklist. 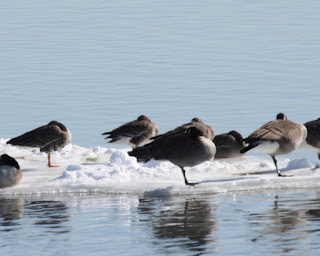 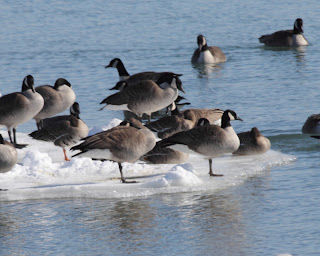 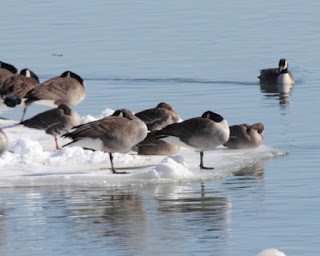 After that it was home to my parents for some lasagna and cake and to watch the Leafs whoop the Canadians!
Posted by Mike Burrell at 08:03 2 comments: