Well it might be safe to say that spring migration has finally arrived in southern Ontario bringing with it some nice rarities in the past week. I'm happy to say I got in on it today with a really nice Worm-eating Warbler! A fine selection of other birds this past week in Ontario:

Blue Grosbeak in Toronto and Windsor


White-eyed Vireo in Toronto, Rondeau, and Long Point (Pelee too?)

Yellow-throated Warblers back at Rondeau

Fish Crow(s) back in Bronte

Avocets, Willet and Hudsonian Godwit...plus some freakishly early stuff and all sorts of other things I haven't mentioned!  Check out the eBird Ontario rare bird alert for much more!

That's a pretty nice week any way you slice it, and looking at the weather forecast it looks like the next week should be pretty good too, so what are you waiting for?
Posted by Mike Burrell at 21:46 4 comments:

Well I got the info back on "my" collared Snow Geese already from the bird banding lab (check out my previous post for photos of the geese). 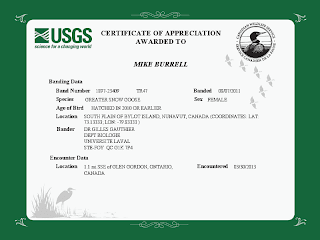 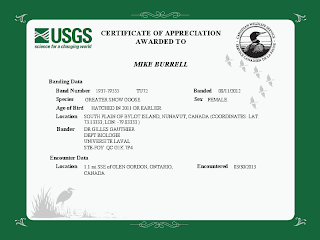 As I expected, both were captured and banded on the breeding grounds of Bylot Island.  That's the same as the bird Ken and I found last spring.  Here's a map to give you a sense of how far these birds still have to travel (remember it is still very much winter where they are going!):

Posted by Mike Burrell at 22:51 No comments:

I've been in easternmost Ontario all Easter weekend and took advantage of the annual Greater Snow Goose migration that passes through the area. On Friday while spending time at Erica's family sugar bush, we had a Golden Eagle fly right overhead.  A few Golden Eagles seem to follow the huge number of geese into eastern Ontario every spring.

After seeing just a few small flocks of Snow Geese on Friday, I decided to head further east Saturday morning going to the Lancaster, Ontario area.  My first stop was Westney Point on Lake St. Francis (the widening of the St. Lawrence River) - I was a bit dissapointed to only see about 2000 Snow Geese on the ice here, but pleasantly surprised to hear and then see a small flock of Cackling Geese in with a big flock of Canadas.  I went a bit further east to Creg Quay Marina and found another 750 Snow Geese.  Between those two spots on the Lake/River I also had a nice mix of ducks including lots of Northern Pintail.

I decided the geese must be out feeding in some fields, so I decided to head north through Lancaster towards where I had seen a big flock a couple springs ago.  I wasn't dissapointed.  Pretty soon I came across a flock of at least 10,000 Snow Geese in a corn field! What was even better was the birds were really close to the road allowing me to get lots of photos and video while sitting in my car: 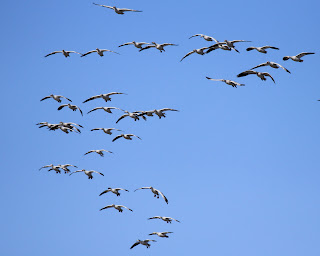 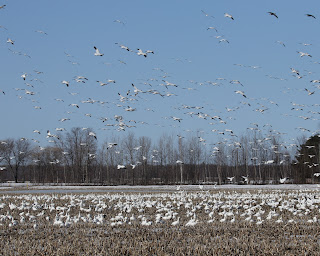 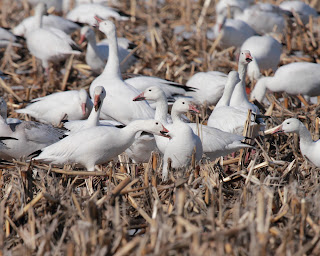 After a little while of searching I picked out something different...a Greater White-fronted Goose! Seem to be seeing lots of them this year! 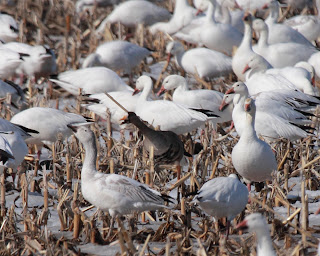 I kept searching and ended up with another couple of interesting geese, first this one that I am calling a Ross's:

And then this one which I think is likely a Ross's x Snow hybrid:

But that wasn't all this flock had to offer me! I soon found a neck-collared bird:
And going through my photos on the computer I found a second one:
I have submitted the information to the Bird Banding Lab and should hear in the next week or two where these birds were originally banded.  Based on the information I received about a similarly-collared bird Ken and I found last year near Ithaca, NY I would bet these birds were banded on their breeding grounds on Bylot Island, Nunavut! I'll post an update once I know for sure! (UPDATE: got the info on both birds back, check here to read about it)

All in all I was happy to see lots of geese of 5 species, although unfortunately I couldn't find the Pink-footed Goose that was in upstate New York recently....
Posted by Mike Burrell at 08:55 No comments: