Red Crossbills on the move

While enjoying the adult female Thick-billed Kingbird the other day at Presqu'ile there was some talk about a movement a-foot of Red Crossbills in Ontario.  It seems that others had seen some flocks moving recently.  Sure enough, we (Ken, Brandon, Josh and I) had a flock of 18 birds go over us while on the beach at the start of the Owen Point trail.  After reading some comments on the ABA blog I see that the Midwest is also enjoying a movement of these birds (and Alan Wormington had a pair at Pelee).

On James Bay, the crew at Long Ridge was apparently getting Red Crossbills quite regularly and we had a single bird fly over at Chickney Point (north of the Albany River).  Just yesterday, I had a flock of 15 flyover while I was at Carden.  Check out the eBird map for this fall to keep track of this movement.

Here are some screen shots from eBird to give an idea of the extent and how unusual the event is for August:

Speaking of nice birds while I was at Carden, we also had a single Dickcissel flyover first thing this morning!

Last night Bill Gilmour found a Thick-billed Kingbird at Presqu'ile Provincial Park!!!  That's an insanely rare bird to show up in Ontario - basically a western Mexico breeder that barely extends into Arizona.  Outside of the extreme SW part of the US there is apparently a record for Colorado and British Columbia, which would make this Ontario record the first eastern NA record! (Check out the eBird range map).  Needless to say, a lot of birders' plans for today changed pretty quickly!  Luckily for me I now live only about 30 mins away from Presqu'ile and even luckier I had already booked Wednesday off to do some birding at Presqu'ile in the morning (and then back home to make dinner for Erica's whose birthday it is!!).

Ken, Brandon and Josh met up at my place late last night (actually early this morning).  We all got some sleep and then headed out.  We arrived just as it was getting light out.  After a few minutes of chatting with some of the other birders there the bird in question obligingly announced its presence with its distinctive call as it left its overnight roost.  For the next hour and a half everyone there enjoying excellent looks as it foraged from the tops of some dead trees.  It had a success rate of capture at least in the 90 percent range and all the prey we could ID seemed to be bees/wasps- the BNA account doesn't have any info on prey preferences but we wondered if that honkin' bill is a wasp-killing adaptation?  Here's some photo evidence of the bird: 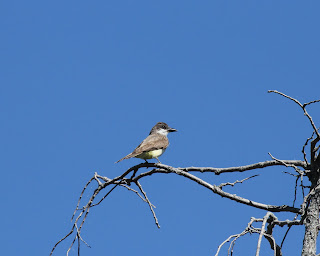 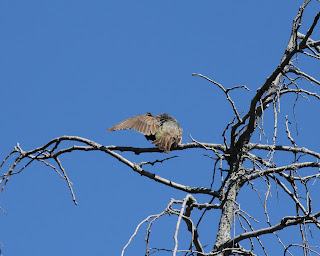 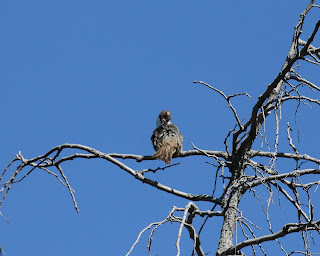 There was lots of discussion about the age of this bird and I have to say I was leaning towards this being an "old" bird while in the field because it was so worn.  After doing some reading and looking at my photos (the middle photo above shows the state of the wing well) I think it is likely a juvenile bird.  All the wing feathers and outer rectrices look incredibly worn (so perhaps that suggests this is a bird born early this year, perhaps from the more southern part of the species range).  It is amazing to see how worn some of these feathers are already for a bird that likely isn't more than half a year old yet.

NOTE: I stand corrected.  After research and discussion amongst others the consensus is that this is an adult (after second year) bird that has yet to undergo its prebasic moult, which is usually completed on the wintering grounds. Based on the shape of P10 (check out Brandon's picture of the bird in flight) this would also be a female.

Anyways hopefully more photos and people with more experience with these matters will come to the same conclusion....Another cool feature of this bird that I captured (in the third image) is the yellow crown patch.

Here's a short video of the bird which includes some calling (by the bird) and lots of birders excitedly talking about random stuff:

The calf pasture area was really hopping with birds while we watched the kingbird.  Passerines were steadily moving west overhead and lots were landing in the trees.  Here's our eBird checklist for that spot.

We checked Owen Point trail afterwards but it was pretty quiet.  We did have one really good sightings though- a flock of 18 Red Crossbills going north overhead.  Apparently there seems to be a movement a foot of these guys....Here's our checklist from Owen Point.

Ken and my Dad and I actually managed to see a Thick-billed Kingbird in San Diego on our southern California trip a couple years ago.  Here's the eBird checklist from that spot.

Well, that's it for now.  I've got an Atlantic Canada and a James Bay trip report coming soon so stayed tuned...
Posted by Mike Burrell at 21:18 4 comments: