There seems to be a lot more interest in Red-tailed Hawk subspecies in Ontario lately. This is obviously a good thing as it is great to see people taking an interest in what is our most commonly observed hawk and probably most variable species in southern Ontario! This species makes for a great study here...I think of them like juncos - you can stare at them all day long and notice the individual variation from bird to bird - no two are exactly alike!

If you are interested at all in the variation of this species then you should probably head on over to Jean Iron's website to check out these articles by her and Ron Pittaway:
Subspecies of the Red-tailed Hawk (1993)
Dark Morph Red-tailed Hawks: calurus or abieticola? (2012)
Hawk Commentary (2016)

Another good article is Identifying Northern Red-tailed Hawks by Jon Ruddy (2014). Check the list of references in all of those articles for more reading!

Anyways, I point you to these information sources so you can read about these wonderful hawks before you see what I have to say/show...

Ken and I were down at Long Point for a quick tour of winter birds on Sunday morning. We weren't disappointed! We racked up 64 species in a morning of birding, highlighted by some good winter birds like Greater White-fronted Goose, Red-shouldered Hawk, Ruby-crowned Kinglet, Hermit Thrush, Gray Catbird, Yellow-rumped Warbler, Fox Sparrow and best of all, a dark morph Red-tailed Hawk. We weren't the finders of any of these birds but rather benefited from other birders being out and about in the days.

Anyways, here's the Red-tailed Hawk in question. For now, I have identified it as a dark morph calurus, sticking with the conventional wisdom that all dark morph birds in Ontario are of that species, but as Jean points out in her article, there could well be dark morph birds of the abieticola subspecies that no one has located in their remote breeding grounds yet! 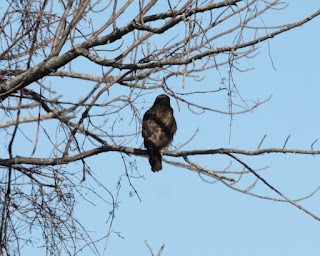 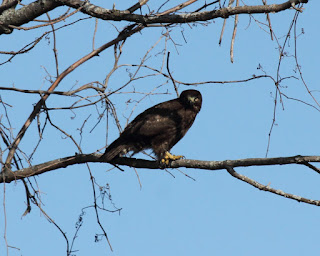 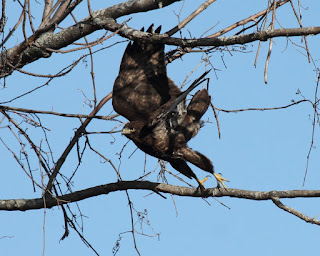 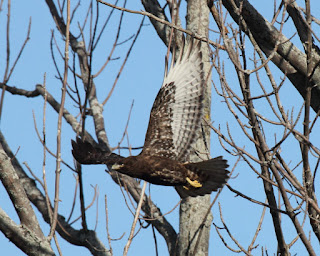 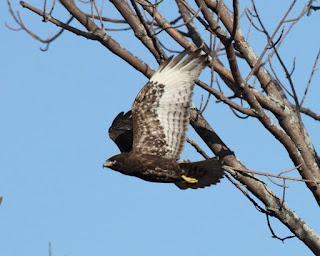 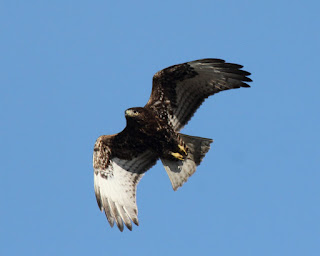 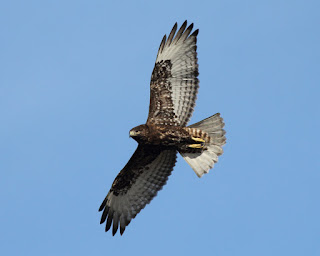 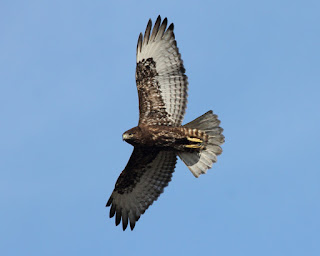 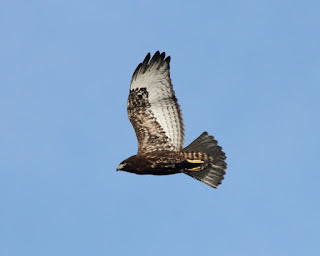 Luke Berg also observed and photographed this bird on 14 January.

Posted by Mike Burrell at 10:58 No comments: