Long Point gold - shorebirds and my rarest bird of the spring

To celebrate Ken's birthday I met him at his place at 4:30 this morning and we headed down for a morning of birding at Long Point. This time of year is great at Long Point with tons of species breeding locally all back on territory and a good number of migrants still coming through.

Our first stop was Hasting's Drive. We were greeted by lots typical late May migrants like flycatchers, thrushes and warblers like Tennessee, Wilson's and Blackpoll. We were walking along the road when we noticed a big flock (230 individuals) of Whimbrels heading west, then shortly after another flock (120). We're right in the prime time for Whimbrels moving through so we decided to head back to the car to do a proper lake watch with the scope. We were rewarded with a total of 865 Whimbrels plus 6 Red Knots (good Long Point bird) within the next hour and 7 Red-throated Loons. Here's our full checklist.
After our success at Hasting's Drive we headed east towards Old Cut where on the way we heard a singing White-throated Sparrow - there's still a great mix of early and late migrants at Long Point making diversity really good. We made a quick walk through the LPBO Old Cut field station (full checklist here) and then walked through the New Provincial Park where activity was still good with lots of the expected migrants for the time of year. Here's our full checklist. We arrived back at Old Cut just in time for Avery (one of the banders at LPBO) to stick his head out of the lab and say "you're going to want to see this bird".

Sure enough it was a very interesting bird! My initial thought went to female Cerulean but the yellow on it made it obvious pretty quickly that wasn't correct. I'll let the photos speak for themselves: 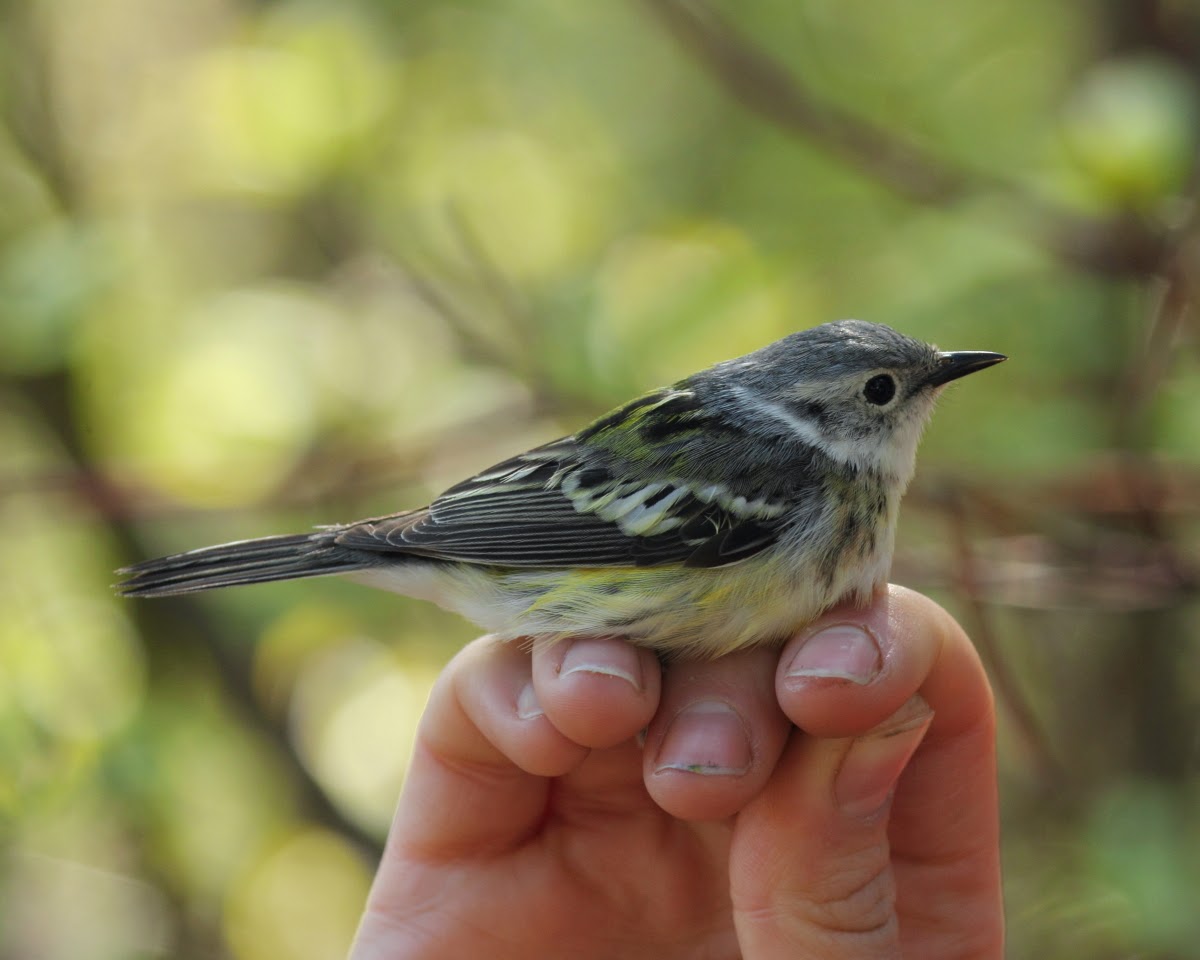 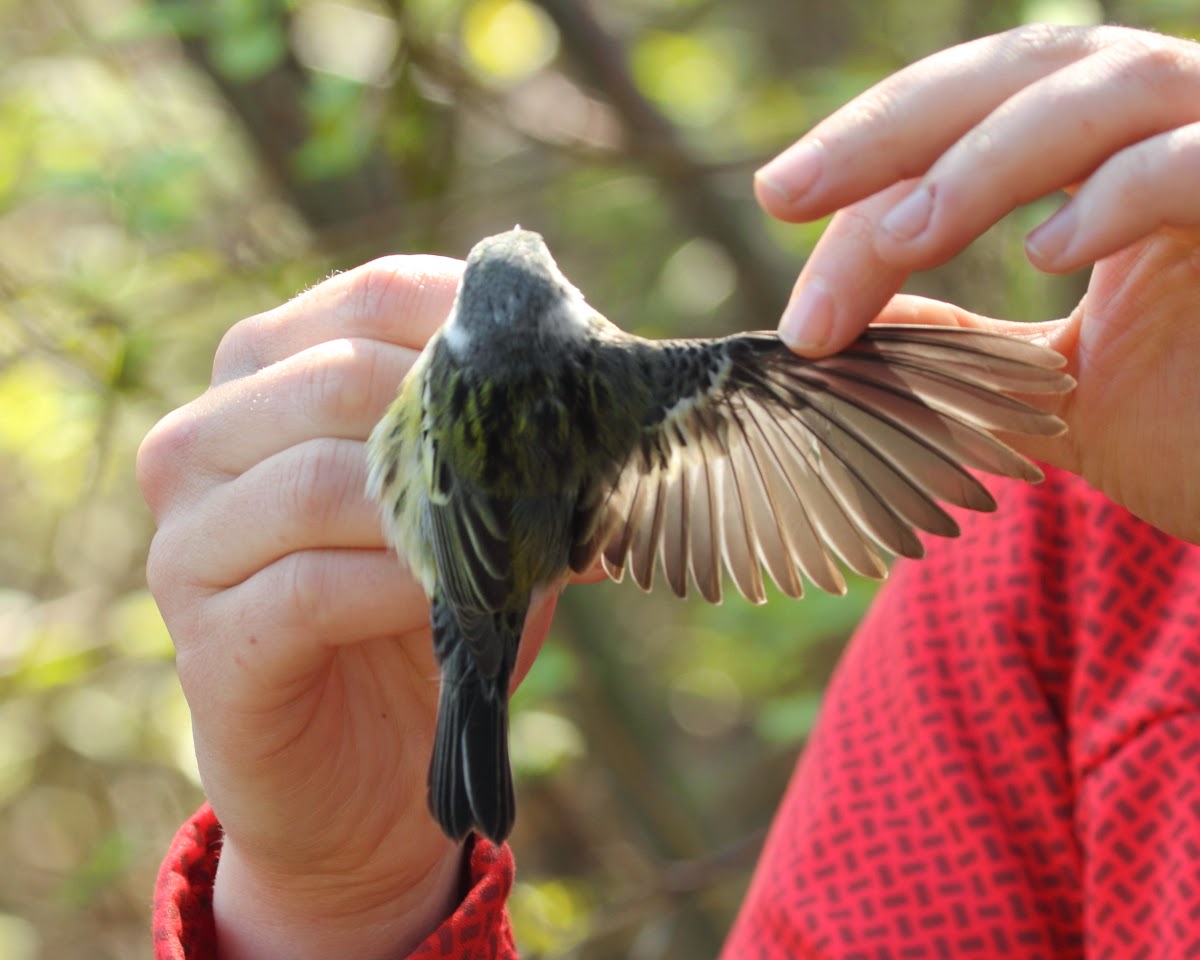 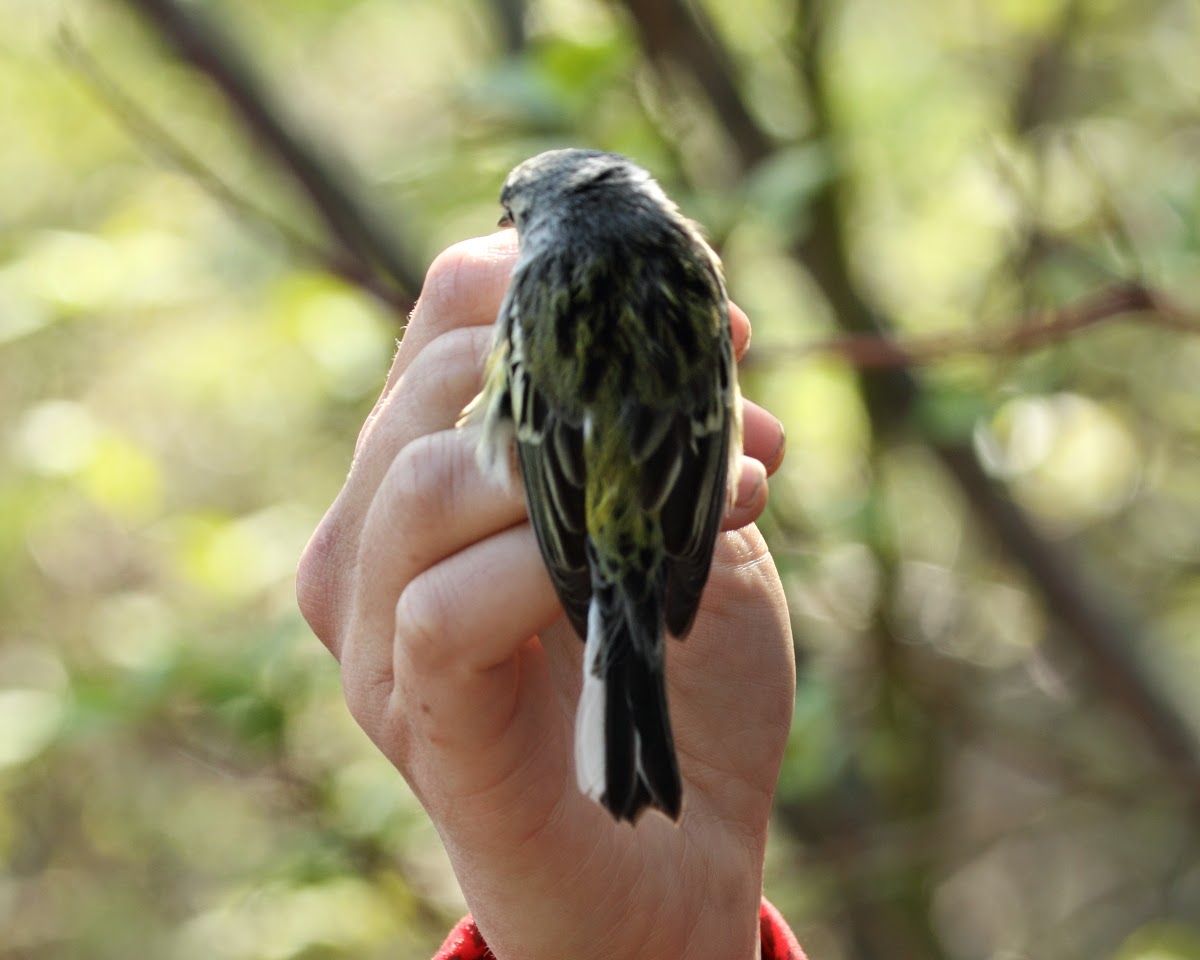 The bird in question has a lot of features that point towards Magnolia Warbler, especially the back and rump, but there is lots wrong for that species - notably the pale head, throat and underparts and the tail (which should have white spots on the tail feathers rather than the white outer rectrices of this bird). Our best guess at the time was a Magnolia x Chestnut-sided Warbler hybrid but looking at the photos again I can see why Cerulean came to mind (check out that head/face) initially.

Magnolia x Chestnut-sided doesn't seem like too much of  stretch since the two species share a lot of breeding range and often are found in similar habitat. Cerulean x Magnolia would be more of a stretch since those two species don't overlap a whole lot or share very similar habitat. What do you think? According to Birds of North America online the only confirmed hybrid involving Magnolia Warbler was one with a Yellow-rumped Warbler from Dominican Republic (Latta, S. C., K. C. Parkes, and J. M. Wunderle. 1998. A new intrageneric Dendroica hybrid from Hispaniola. Auk 115(2):533-537.). That combination is extra interesting to me because I am convinced I observed such a bird just a week and a half ago...see my description of it here.

Anyways, we made a stop at Townsend Sewage Lagoons on the way home where there was a good number of shorebirds (see our full checklist here) including a beautiful female Wilson's Phalarope. We ended our day at about 140 species, not too shabby!

If you're thinking about visiting Long Point be sure to check out the new Long Point Birding Trail either online or by picking up your copy at Bird Studies Canada headquarters or the Old Cut field station.
Posted by Mike Burrell at 18:56 2 comments:

May birds and bugs

It's been a pretty crazy last few weeks for me doing presentations about the Important Bird Area program around southern Ontario but it has been a great excuse to be out and about and seeing lots of fun stuff. I've even had a chance to take a couple photos of some of the goodies - check em out!

It's not too late to support my Baillie Birdathon! If you want to hear all about our day of birds and fundraising you'll need to sponsor me. See here for more details. If you already have sponsored me, thanks very much, the report should be going out to you in the next week!
Posted by Mike Burrell at 21:15 1 comment:

Another birdathon in the bag!

The weather looked promising so we started our 16th annual Baillie Birdathon yesterday at 5pm and finished up today at the same time with a nice list. If you want to see all the details, you'll have to sponsor me -> click here to make a donation online or else email me.

I will tell you that the highlight was the Blue Grosbeak that Eric Holden found at the Tip and that we saw "reverse" south three times (and photographed one of those times by Brandon!) but this bird found by my Dad wasn't bad either:

On the 7th/8th I did something I had never accomplished before in 24 hour period - the Vermivora sweep. We found a spankin male Lawrence's Warbler, then in the afternoon I found a Brewster's and a Golden-winged Warbler and first thing this morning I had a couple Blue-wingeds, completing the sweep. Pretty sweet!

Looks like we're in for a solid four or five days of birding with lots of warm temperatures and southerly winds.
Posted by Mike Burrell at 21:42 No comments: