I recently received/calculated some of the most recent Ontario eBird stats, which many of you might find interesting. Most of these stats (unless mentioned otherwise) are as of the end of February 2013.

If you aren't using eBird yet, you might find this presentation I recently did helpful.

First up, the most interesting stat (in my opinion) is the number of checklists submitted per year. The growth of eBird in Ontario continues to be staggering:

And amazingly, we are already (as of March 29, 2013) up to 37,097 for this year! February and March 2013 have had the most checklist submissions yet! Viewing the same data, but per month reveals the not surprising trend through the year where birders are out most in spring and fall:

The geographic distribution of observations has stabilized a little bit now, with the only real surprises (in my opinion) being a) Northumberland at number 1 (although that is explained by about half of those are from the upload of the Northumberland County Bird Database); b) the relatively poor showing by Hamilton and Halton at spot 14 and 15; c) the strength of Peterborough; and d) the relatively poor showing by Middlesex at spot number 30. The full listing is in table 1:

Table 1. Total number of eBird observations submitted for each Ontario "county" all time, sorted from most to least observations.


The Ontario eBird user base also continues to grow. To date we have received checklists from an impressive 5985 different users! I have ranked everyone by the number of observations (each species/checklist combination counts as an observation) - if you want to know where you fit on that list or your total number of eBird observations let me know! Personally, I've submitted just shy of 83,000 observations!

And finally, eBird has records of 679 species, forms, spuhs and slashes (read this article to understand what that means!) in the public database.  The top 25 species reported are listed in Table 2:

I've given a few "Introduction to eBird" presentations over the last couple years and I got around to recording one in March. I've put it up on YouTube.  You can watch it embedded or click on the video to open it in a new window.  It is just over 45 minutes long:


Also, be sure to check out the latest Ontario eBird stats here.
Posted by Mike Burrell at 09:43 No comments:

On the weekend I was chasing a Snow Goose that had just flown over me with a flock of Canadas when I got sidetracked by some Wild Turkeys.  You see, I came over the crest of a hill and saw the familiar sight of a flock of Wild Turkeys, except this time there was a big Tom strutting his stuff in all his glory.  I pulled up parallel with him and parked my car and grabbed my camera.  I got quite a show over the next 30 minutes! 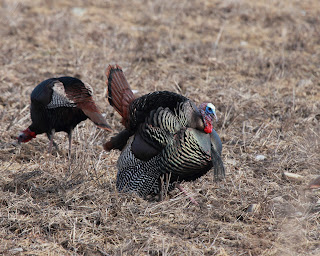 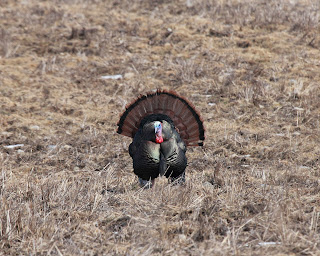 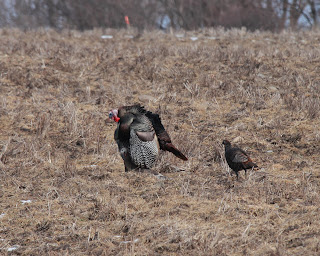 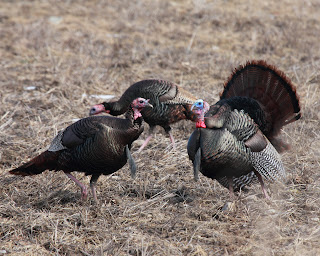 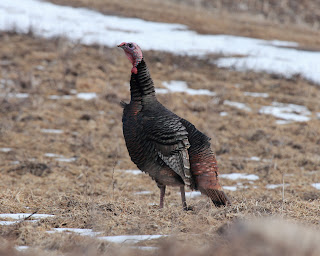 I initially thought I captured some mating on video, but after reviewing it it just looks like the Tom is awkwardly balancing on the hen's back....not sure if this is foreplay or equivalent to spooning...what do you think? :)

On St. Patrick's Day Ken, my Dad and I led our annual swan/waterfowl/early spring migrants trip to Long Point with the Kitchener-Waterloo Field Naturalists Club.  It was a very successful outing despite the sometimes wintery weather (in stark contrast to last year's shorts weather!).  We managed 64 species for the day, which is about normal for the trip.

We always start the trip off at Aylmer Wildlife Management Area to have a look for Tundra Swans.  This year, thanks in part to the late spring, there were still a few thousand swans to be had.  From there we make a quick stop at the Aylmer Sewage Lagoons before heading east along the lake shore to Long Point.  The ducks this year at Long Point were really good.  There were about 10,000 ducks in the Inner Bay, mostly divers like Redhead, Scaup, and Canvasback.  Besides the large numbers of diving ducks a nice bonus were the two Greater White-fronted Geese at Lee Browns: 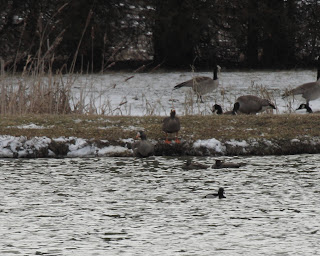 The Greater White-fronted Geese were a Long Point bird for me which made them extra nice. The real highlight of the day however was our last stop of the day at Turkey Point. Here, while scoping from the marina we saw some distant Little Gulls.  We drove down closer and had great looks at at least 25 Little Gulls. The whole group enjoyed great looks at these birds as a nice way to finish the day.

Ontario birders often take Little Gulls for granted but we are pretty unique in North America to have such good numbers of these tiniest gulls in the world.  Just check out the map on eBird or notice the fact that the ABA ranks them as rare or Code 3 on the ABA Checklist. I managed to snap quite a few photos of 3 ages: 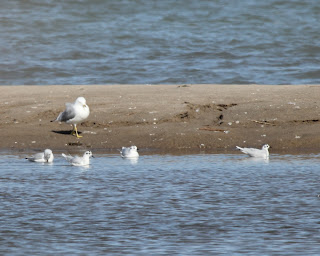 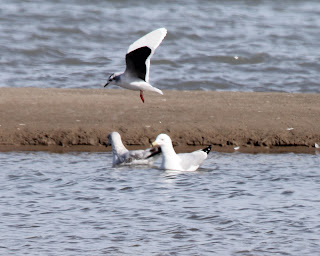 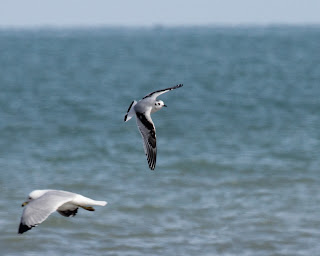 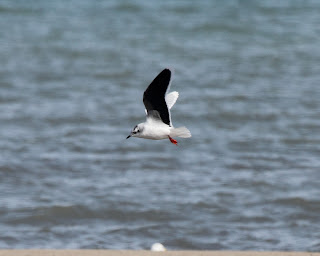 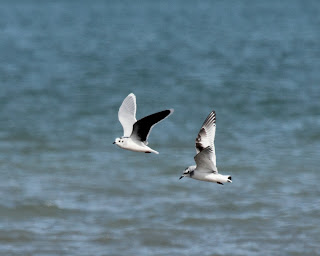 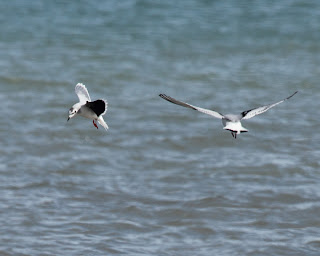 Posted by Mike Burrell at 18:59 No comments:

North American Birds, the excellent seasonal reports brought to you 4 times a year by the American Birding Association is going digital...

This is great news for a lot of reasons that I won't get into.  Anyways, as a way to encourage new subscribers the most recent issue (which includes last spring's Ontario seasonal summary by Alan Wormington) is being made available for free!!

So check it out and if you like what you see sign up for a membership! This is a great summary of each season in Ontario but also for all the other provinces and states and there are always some interesting articles about bird distribution in North America plus lots of great photos.

Note, there are apparently a few pages missing so be sure to check back tomorrow for the complete version.

Tonight on my way home from work I saw a Barred Owl...this has been a pretty regular occurrence this year and I am already up to 17 observations! Last year with a similar length commute through similarly good Barred Owl territory I had 6 observations by this date.

So why the difference?  It seems that Barred Owls are more conspicuous this year partly because they are very hungry, so they are out earlier in the evening, later in the morning and sometimes all day trying to find some food.  It seems that hunger has also pushed more further south this winter. Barred Owls showed up on several Christmas Bird Counts where they don't normally (like the Kitchener count, where 2 were found on count day). Just check out the eBird map for this January-March:
And compare that to last year's map for the same period:
It seems like a good guess that for the same reasons that pretty much every irruptive bird species left most of the northern forests this winter (lack of tree seed crops) that small mammal populations have also dropped off, leaving Barred Owls (and Great Grays, Northern Hawk and Boreal Owls) with no choice but to head south in search of better foraging grounds. It likely also helps that it seems like Barred Owls had a pretty good breeding season: the Ontario Nocturnal Owl Survey reported a record high count of Barred Owls last spring and most of the Barred Owls I have seen and photographed have been young (born in 2012) birds.

Barred Owls were likely once common in forested southern Ontario but they are surprisingly rare there, with only very scattered individual pairs south of Toronto- check out the Ontario Breeding Bird Atlas maps to see what I mean. As forests mature in southern Ontario though maybe these big irruptions will help re-establish the species there.
Posted by Mike Burrell at 23:12 3 comments:

Lame title, eh? Well, I have a bunch of stuff so I figured I'd put it all into a single blog post.

Last weekend we were visiting Erica's parents and as has become quite normal recently, we found some Gray Partridges right near the farm.  Erica's parents have even seen them right up on their lawn this winter.  Anyways, I had my best looks ever at this species: 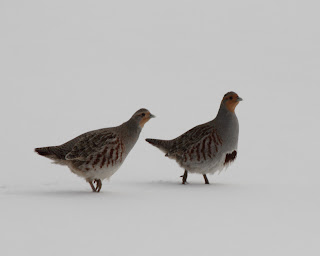 On the same outing we had nice looks at both male and female hybrid Mallard x American Black Duck:

Posted by Mike Burrell at 20:41 No comments:

Spring migration is a GO

Had a chance to get out and see some early spring migrants on the weekend in my (current) local area...in case you're trying to keep up with where I currently call home, right now it is near Belleville (yes, I know the "about me" section still says Bancroft...).

On Saturday Erica and I checked out Bleasdell Boulder Conservation Area (one of our many local CA's).  It was a short walk through some cedar forest and then into more decidous trees, including some nice Shagbark Hickories.  The boulder itselft was pretty big, in fact it is apparently Ontario's largest glacial erratic.  Not too many birds around there but the sun was so nice it felt good to be outside.

Of course, we took the long way there (don't tell Erica!) along the Trent River and we were rewarded with a nice pair of Eastern Bluebirds and an adult Bald Eagle.  Despite the nice weather the wind still hadn't switched to the south, so no blackbirds were back yet (that we found).

Sunday was a different story, and I got up early (well, earlier then Ken at least) to see what had arrived overnight.  I decided to tour around Prince Edward County, a place I am still getting to know.  My first stop was in Rossmore, just after crossing the Bay of Quinte on the Bay Bridge. As I was crossing I was surprised to see a large patch of open water on the east side of the bridge so I pulled over to scope the waterfowl.  I was pleasantly surprised to see my first Wood Ducks and to hear a few Killdeer flying over.  See my full checklist. 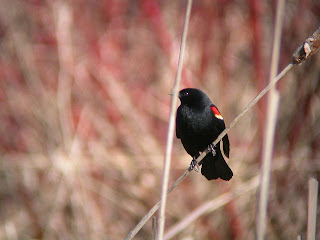 The rest of the morning was spent travelling out the Waupoos Peninsula then over to Wellington.  The south shore of the Waupoos Peninsula had lots of open water and lots of ducks, but nothing unusual.  Wellington harbour was good as usual for ducks with a nice selection. See my full checklist.  Red-winged Blackbirds were common all over and American Robins and Common Grackles were also pretty widespread.  I also had a couple of singing Song Sparrows to really make it feel like spring might be here. All-in-all I picked up 41 species in the morning without working up a sweat... 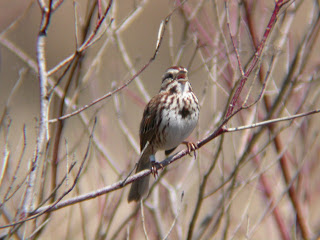 Today was also good for newly arrived birds. I checked out Little Lake at lunch with a couple co-workers and had a nice selection of ducks, including my first Northern Pintail of the year.  No sign of Devin's Wood Ducks though. I was amazed to see how similar some of our counts were today to what I had 1 year ago on March 12 at the same location.

Anyways, it is always an exciting time of year for sure...even if we get more winter weather the blackbirds and ducks will keep on coming.  If you are like me, you'll like keeping an eye on some of these resources related to bird migration:

eBird maps - great for watching as species get closer and closer!
Birdcast - weekly migration forecasts!
Windmap - never leave home without it!
Nexrad - good for checking at night to see big bird movements
(and of course all the great blogs on the right of your screen)
Posted by Mike Burrell at 20:15 No comments: