I've wanted to put something like this together for a while now but it wasn't until I read the "Changing Seasons" piece in Volume 65 Number 3 of North American Birds that I had a good way to do it.  So what is it?  Following this short introduction you'll find a list of 198 of Ontario's fairly common birds and the dates you can reasonably expect to find them returning.

Background: in the article I mentioned above, Marshall Iliff, Brian Sullivan, and Chris Wood (AKA eBird HQ) proposed that we should start using 20% of the peak arrival frequency for a given species to indicate the day that a species arrives on a broad front (I'll refer to this day from here on out as the "mass arrival date".  The eBird team showed that this is really a good measure of arrivals since it is largely independent of outliers (exceptionally early individual birds), independent of sampling effort (since it is based on percentages of checklists, not raw number of checklists), and adjusted for species' rarity. Email me if you want a scanned copy of the article.


Methods: I went through the eBird frequency graphs (for all data years 1900-2013) for each species reported in Ontario. Frequency is a common statistic eBird calculates - it is the percentage of checklists reported for a given date/location which have a positive observation for a given species.  I didn't include species that are very rare in Ontario during spring migration, species which don't show an appreciable widespread seasonally predictable change in frequency (i.e. resident and irruptive species), or species which are more frequently encountered during the winter season and just decrease through spring migration (i.e. they don't show a spring migration spike in frequency).  That left me with 201 species.  For each of the 201 spring migrants I collected the date and value (frequency) of the spring migration peak and then calculated what the mass arrival date frequency would be and what date the average mass arrival date in Ontario is (Figure 1).  For species which overwinter in parts of Ontario I corrected for the "winter frequency" by calculating the mass arrival date as: 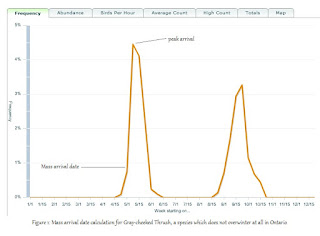 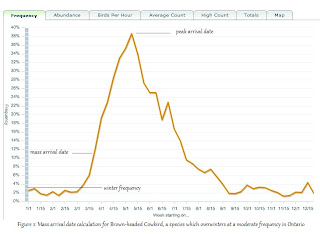 Results: Well, first of all to most of you this information won't be new, but I think it is interesting to put some hard numbers to things.  Keep in mind when looking at the results that these results show the average date that the species arrives on a relatively widespread front across Ontario.  So, the actual date will obviously be earlier along Lake Erie but later in Thunder Bay - interpret accordingly.  Before the final results, here's a neat figure showing the number of species arriving en masse per week during the course of spring migration. 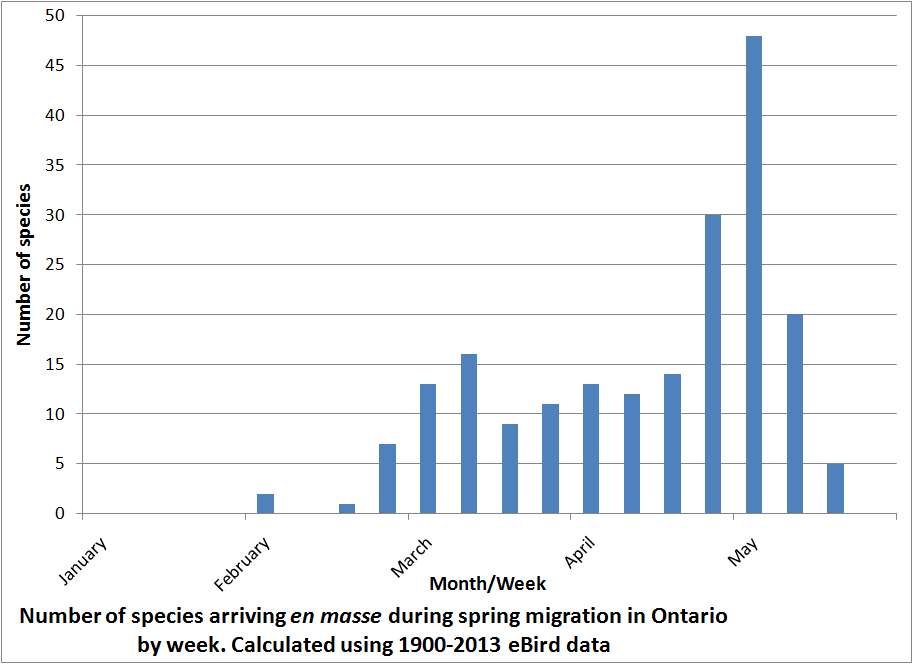 OK, here are the results, now get out there and find some spring migrants and be sure to report your findings to eBird so we can compare how advanced (or not) this year has been!


*these species are barely calculable due to a pretty weak peak

Anyways, I hope you find this information interesting/helpful.  Please let me know of any errors you see.  It will only get better as more eBird data comes in.