On Friday morning I decided to check out the Frink Centre not far from where we are living.  It is a nice outdoor ed facility but also a Conservation Area which includes a very nice marsh with a boardwalk through it.  I was really impressed with the marsh and managed to pick up a few new Hastings County marsh birds (Sora, Virginia Rail, Least and Solitary Sandpiper) - check out my full eBird checklist.  Turtles, however, stole the show for me.

The night had been cool and the sun was out so lots of painted turtles were basking: 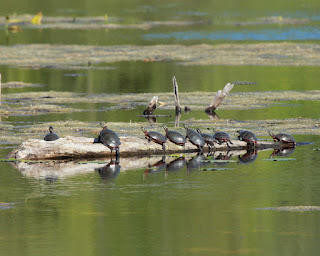 And it didn't take me too long to find a few Blanding's Turtles: 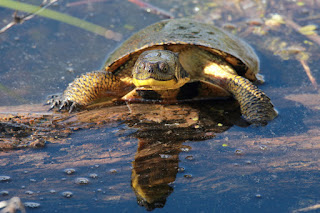 But the really interesting thing happened next.  While slowly walking along the boardwalk I saw some splashing in the water.  I for some reason started thinking "Otter" but when I looked through my binoculars I could see it was something stranger: 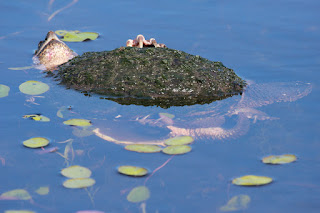 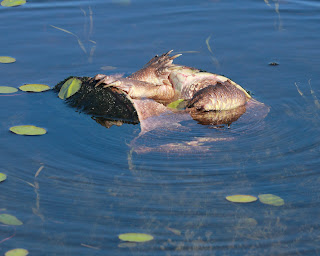 That's right, Snapping Turtles mating! I got a couple videos of it too:
That went on for about 30 minutes and at one point one of them even hissed...afterwards they spent some time thinking bout what they had just done: 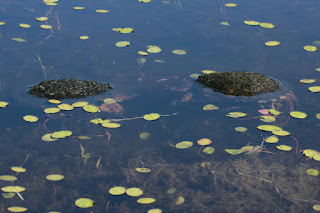 Snapping Turtles will be out laying eggs in a couple weeks or so. If you see any turtles or herps at all be sure to report them to the Ontario Reptile and Amphibian Atlas.

Way back in January 2012 I did a post about my total Ontario county ticks list and I'm happy to say I've finally reached my goal of 6000.  I did that earlier this year just haven't had a chance to sit down and blog about it (I'm actually up to 6052 now). My most recent county tick? Lark Bunting for Frontenac county...

Anyways, some straight stats.  I added species to a rather surprising 38 county lists. My biggest changes since then are:
1. Kenora - from 0 to 126 for a gain of 126 and more importantly knocking of 1 of my 3 zeros. (trips to Burnt Point and James Bay)
2. Prince Edward - from 98 to 182 for a gain of 84.  Last summer I moved to with about 15 minutes of "the county" and am still adding easy stuff whenever I go there...most recently I added Scarlet Tanager and Lincoln's Sparrow at Prince Edward Point. I'm hoping I get break 200 this year.
3. Peterborough - from 122 to 202 for a gain of 80.  I have been working in Peterborough now for almost 2 years AND I did a big day in Peterborough which netted me 16 species on its own.
4. Hastings - from 139 to 179 for a gain of 40.  Currently my home county although most of the birds are yard birds or casual observations.  The gain would have been bigger but I did some work here in 2008/2009 and worked in the north end of Hastings for a while in Bancroft.  This would be a nice one to break 200 in...just need to find a good shorebird spot and spend a bit more migration time out and about.
5. Northumberland - from 177 to 213 for a gain of 36.  I'm only about 30 minutes from Presqu'ile now so I'm picking up lots of easy stuff I didn't have.  Still lots more to easily add.

With any luck I should finally get Thunder Bay and Algoma on the board this summer and a trip through southern Ontario could really boost my numbers.  My goal for 2013 is to get a couple more counties over 200 (Hamilton and Prince Edward) and to get five more over 100.  Getting to 6500 would be nice too.  We'll see.

How is everyone else doing for total county ticks? What are your big misses?
Posted by Mike Burrell at 08:02 2 comments:

The birding in southern Ontario since mid-April has been great, to say the least with a long list of rarities having shown up.  I've been lucky enough to connect with more than my fair share and I have been very happy for that.  The last two have had something in common - they were both associating with flocks of White-crowned Sparrows.

The first of these rarities was a young male Blue Grosbeak on Pelee Island.  It was found during the Pelee Island bird race (AKA Botham Cup) by Paul Carter.  Unfortunately, Paul wasn't on a team and though he waited for one of the 7 teams to pass him, none did, so no teams got it for the tally.  Most of them (including us) headed to there right after the race ended at noon on Saturday and got looks at this bird.  It was pretty elusive, alternating between the thick hedgerow and the grassy field that was just high enough to hide the bird.  It stuck around until at least May 13 (3 days) and on May 12 I got a few "record" shots of this bird: 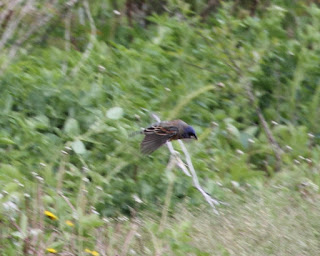 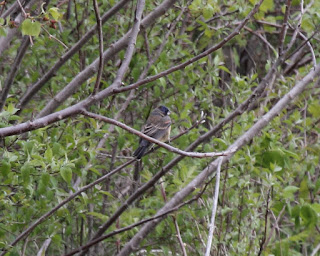 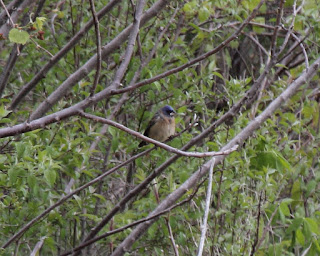 This was a really nice bird to get and it was only my second ever (the first was a female I found at the Tip of Long Point on May 6, 2004). I think the photos of the more recent Blue Grosbeak might be a bit better....

The next nice bird to get was today. I was headed into Prince Edward County to check out some spots when I saw the post on Ontbirds advising that a Lark Bunting had been found by Mark Saunders at his home near Sharbot Lake.  I decided to do some birding in the county first, then head north.  I got on site a little after 1pm and I was greeted by Mark himself.  He told me the story about how he heard this strange song that reminded him of a mockingbird at 5am and when he went outside to investigate it turned out to be a Lark Bunting.  Amazingly, Mark had a Lark Sparrow at the same spot a couple years ago.  His farm is small but it is one of the only open field habitats in a sea of Canadian Shield forest for many kilometres in each direction.

Anyways, back to the bird.  The Lark Bunting was hanging out in a fairly small area near the actual house, usually with White-crowned Sparrows and after about 1 or 2 minutes of Mark telling me the story and showing me some of the places it had been seen the bird popped up and flew in front of me!  Obviously, it is a pretty distinctive bird with those big 'ol white wing patches and I got my camera out right away.  I managed a few shots and even one video of it. Overall I was a bit surprised at how small it was (certainly no bigger than the White-crowned Sparrows it was with), expecting something a bit bigger but that didn't bother me! 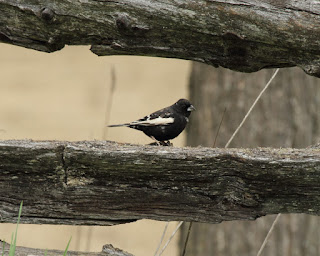 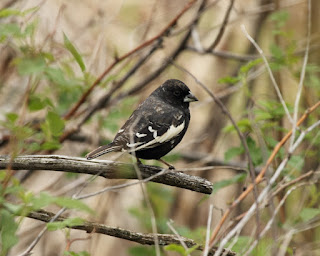 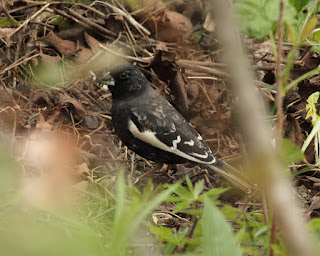 Well, it goes to show you, it is definitely worth checking through those flocks of common birds!
Posted by Mike Burrell at 20:49 No comments:

Erica and I headed to tropical Ontario yesterday and camped at Rondeau; we picked up lots of new arrivals for us and then spent a couple hours birding the park this morning after camping over last night.  It was a really nice day already and we headed out at 10 towards Pelee.  That's when the excitement really happened!

Just after passing through Port Alma a bird appeared in the air beside someone's house.....and I yelled to Erica "Swallow-tailed Kite!!!" Wow, what a sweet bird as it lazily kited around the trees in the yard and then started moving NW into the field.  After some frantic phone calls the bird started heading west down the road....so we followed it!  Erica got the word out on Ontbirds as we watched as it gracefully flew back and forth over our heads, checking out each grove of trees it came to.  After doing this for a few minutes the bird started picking up speed and just basically b-lining west along the lake shore.  And I mean RIGHT along the lake shore - presumably getting some lift from the bluffs and with a nice tail wind.  At times I had the car doing 60 km/h just keeping up with it! After about 30 minutes Ken met up with us frantically heading east and we got him to turn around and follow us and the bird.  The bird had gotten ahead of us so we dumped his car (windows open and keys in the ignition!!!) and found a good spot to look for the bird.  Sure enough we picked it up over Wheatley Provincial Park.

Since the bird was now well to our west we decided to leave the bird and to backtrack to get Ken's car. After getting through Wheatley and passing Hillman Marsh amazingly we picked it up again as it miraculously appeared directly overhead on Mersea Road E, where we lost it as it disappeared over the marsh before we could get up over the dyke that borders the Pelee marsh.  A few minutes later the crowd that had gathered at the visitor centre parking lot had the bird obligingly come right overhead as it headed south (apparently David Bell's calculated time was within seconds!).....as far as I know that was the last it was seen so it either snuck back north or made the crossing over Lake Erie... 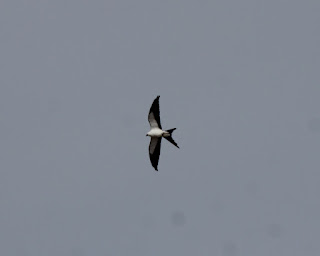 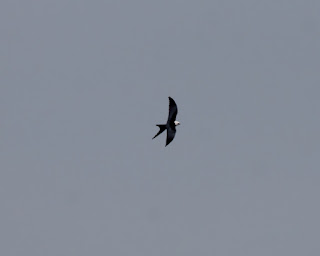 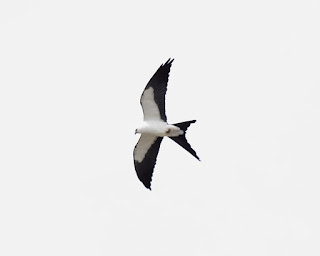 I'm sure Brandon and David (and lots of others who waited patiently at the VC for the bird!) will some some pictures on their blogs...

And of course some eBird checklists with location info: