What do Long-tailed Jaegers eat in Ontario? A week full of surprises

It was a very exciting week for me with all sorts of pleasant surprises wherever I went.

To start things off, on Sunday, Ken, my Dad and I were headed down to Holiday Beach IBA for the annual Hawk Festival. We left Waterloo in the dark but hadn't even made it to the 401 when we had our first surprise of the day. Just as we were getting off Hwy 8 I noticed a raptor sitting on a light post. Without thinking much I said "hey there's a red-tail". But as I looked at the bird a bit longer I realized that's not what it was. I pulled onto the shoulder of the ramp and put my bins on it and was surprised to see this:

Yep, a Snowy Owl - on September 13! I think it is more likely that this is a lingering bird from the big irruption last winter rather than an early fall migrant. We don't expect them until November at the earliest. Last year there were a couple of lingering Snowy Owls in Hamilton and on Amherst Island through the summer, so it does happen but it sure is a surprise to see!

With our spirits high from our surprising find we continued towards Holiday Beach. Before arriving we knew we were in for a good hawk flight as the conditions were perfect (clear with a brisk NW wind) and we were already seeing Sharp-shinned Hawks flying over the fields we were passing. We weren't the only ones thinking the same thing as the turnout was excellent: 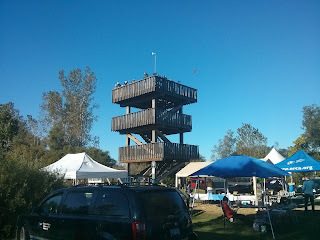 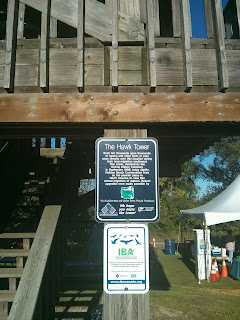 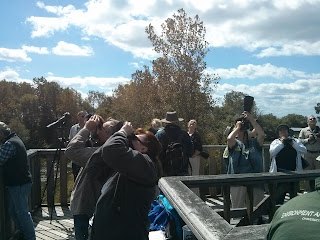 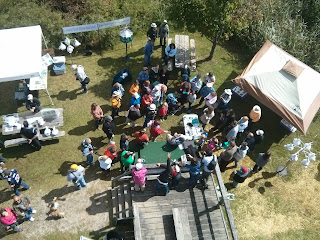 And here's what everyone was watching:
That's right, nice big kettles of Broad-winged Hawks. They really got going at about 11 am and were still going strong when we left at 2. In any given year 2-6% of the world population of Broad-winged Hawks funnels through Holiday Beach, and usually a big chunk of those birds pass through in a few key days. The day's tally was over 7000, or about .5% of the world population! Needless to say we weren't disappointed, or even that surprised since the conditions were perfect. What was a surprise though was a dark morph Broad-winged Hawk that we saw go over with a group of "normal" (light morph) broad-wings in the afternoon. That was my first ever and Ken's second.

Our highlight, however happened just before noon. I was waiting by the classroom to get organized for a presentation I was to give when Jeremy Bensette and Emma Buck came walking over. As we were chatting I looked up to see a line of broad-wings passing overhead through a gap in the trees. I lucked out because as I put my binoculars up I noticed a heavily marked, slightly larger, and longer wings buteo overhead - "I've got a Swainson's Hawk!". Jeremy got it right away and even snapped a couple photos. It was an Ontario bird for both of us. I phoned Ken since he was on the tower and I wanted to make sure they got the bird too - he answered the phone with "juvenile light or intermediate morph!" then hung up. Pretty sweet!

And we had one more surprise fly over that day from the tower:

That was Sunday. Through the week I was busy with some great staff meetings at Bird Studies Canada's headquarters in Port Rowan. A Say's Phoebe was found near Rondeau but a chase was not in the cards for me.

But my biggest surprise came yesterday, when I was at Erica's childhood home for some birthday parties. I checked my email in the morning and saw that Parasitic Jaeger had been found feeding in a field just 10 minutes to the north. I filed the information away thinking I'd go have a look later in the day. My phone promptly died so I didn't think too much more about it. Then, Erica's brother texted her to say he had spotted a crowd of birders checking something out at the spot so Erica and I went for a drive. When we got there we found out that it was actually a Long-tailed Jaeger - much rarer, and probably a first county record. At first it was a bit distant but eventually it started flying around feeding around the field, sometimes flying within 5 metres of us. At one point it landed, caught and ate a worm about 10 metres away from us. Absolutely amazing views of a bird that I have only ever seen way out on Lake Ontario off of Hamilton. 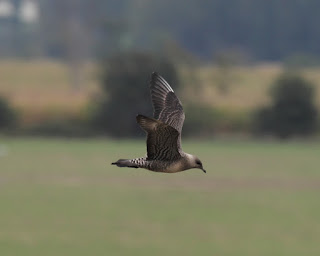 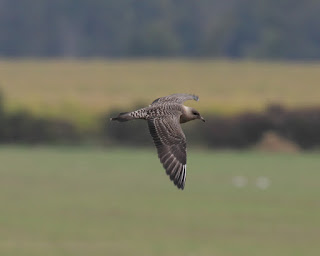 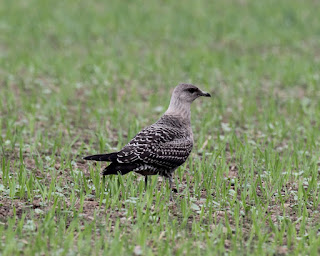 Needless to say, before the week started if you had told me I'd see a Snowy Owl, Swainson's Hawk, dark morph Broad-winged Hawk, and a worm-eating Long-tailed Jaeger I would have asked you if you'd hit your head!
Posted by Mike Burrell at 10:53 1 comment: