The last week of March

This past week has really started to feel like spring! I had my firsts of several species including Snow Goose, Ruddy Duck, Wood Duck, Sandhill Crane, Killdeer, Green-winged Teal, Bonaparte's Gull, American Woodcock, and Great Blue Heron. Part of that list was because I've been down at Long Point but I think many of those species have spread north into much of southern Ontario now.

I think basically this past week served to "catch up" for alot of species, check out the eBird figures for our old friends RWBL and COGR: 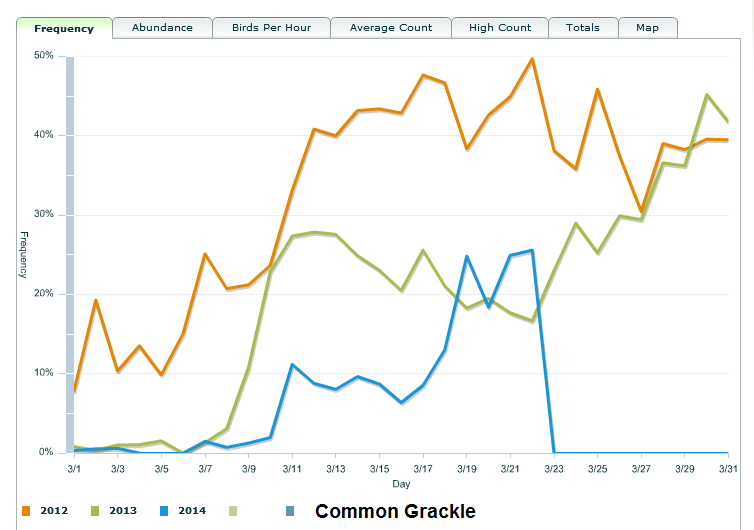 That being said, it doesn't look like winter is ready to release us quite yet and we're getting a reminder of that for the first half of the week. For the birds that are "scheduled" to arrive this week, looking at the list I'm not too optimistic that we'll end March on schedule. Most of the birds that normally arrive this week are passerines and I'm not going to hold my breath that we'll see the first "mass arrival" of Eastern Phoebes. Anyways, here's the list of species that normally arrive this week (for methodology and full spring list click here):

Posted by Mike Burrell at 21:59 No comments:

Birds are in the air!

We finally have a night with favourable conditions for migration and it looks like lots of birds are taking advantage of it. Check out the wind map showing light ESE winds over southwestern Ontario:

The Radar is lighting up with birds tonight - check out this animation from the Cleveland station over southwestern Lake Erie. You can see the birds taking to the sky just after dusk:

eBird has a good primer on Radar and bird migration here.

With the favourable weather tonight (and the direct evidence above) we should have lots of new birds (finally) reaching southern Ontario for us to wake up to. The rain predicted to start early in the morning should stop this migration pretty quickly. At this time of year it's not likely to result in anything too crazy but we might get closer to being "caught up" in terms of migration. I'd expect to see a good push of dabbling ducks, robins, blackbirds, killdeer, and maybe the odd passerine species that normally shows up in late March...we'll see!

On the weekend we rolled over to the third week of March but it still feels like the third week of January (OK, maybe I'll give you the third week of February). Waterfowl migration should be in high gear by now but there's not much incentive for them to move with snow banks and frozen water bodies everywhere. I had to chuckle a little bit when I saw Tree Swallow appear as a "most likely" species on my eBird checklist today (that's based on a two-week window).

Migration is still pushing on though with blackbirds continuing to trickle north. We're getting closer to "normal" frequencies for our favourite species, but still a fair ways off the mark, especially compared to the last two years: 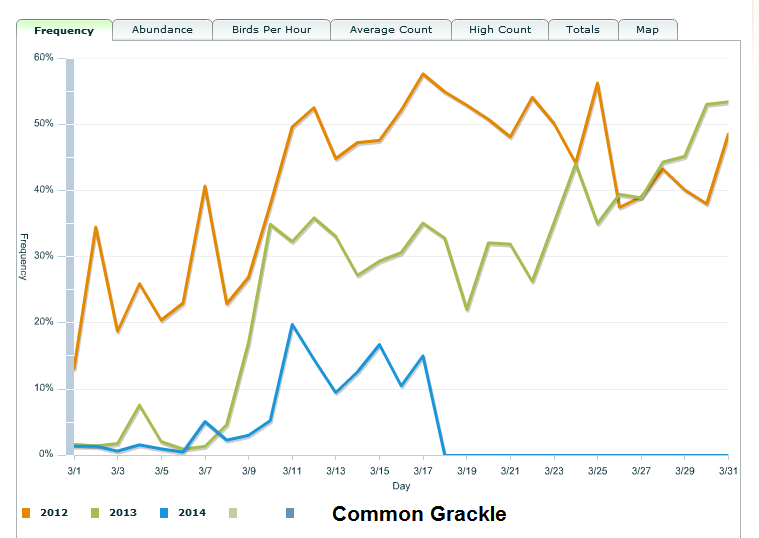 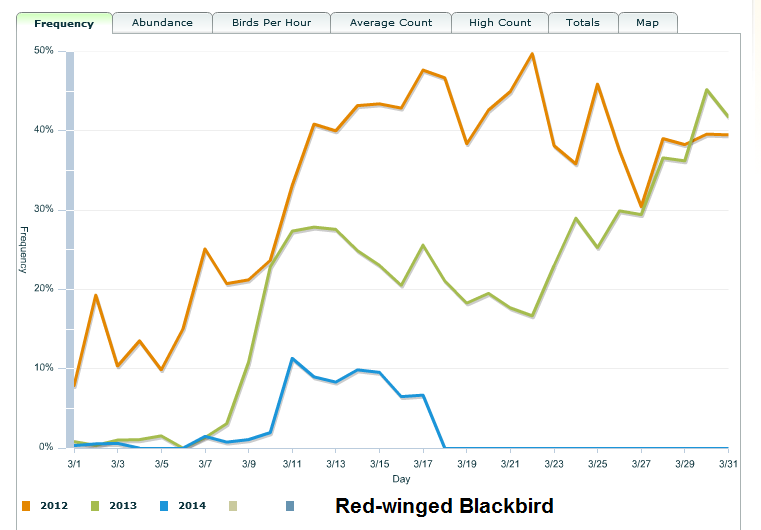 What should we be watching for this week?

The third week of March usually slows down from the previous week for new arrivals (but still plenty of individuals). Who knows, maybe with the warm weather later this week we'll get the waterfowl that was supposed to arrive last week?? The following nine species arrive, on average, "en masse" this week:

Posted by Mike Burrell at 21:48 No comments:

Erica and I headed south this weekend to visit our friend Mothboy in Ithaca. Ithaca is a very scenic place with forested hills, deep gorges, and waterfalls all around. It felt like we were transported into the future - much less snow and open water made it feel like spring!

Out around Ithaca we got to enjoy lots of "carolinian" species like Tufted Titmouse, Carolina Wren, and Red-bellied Woodpecker plus an Ithaca specialty Fish Crow. I was also successfully able to track down the ducks and gulls that have been missing from Ontario! Turns out Cayuga Lake is so deep that it doesn't freeze. They've had a great winter for gulls down there (explains where all those that I haven't been seeing have gotten to) - in the afternoon at the south end of the lake we had well over a thousand gulls on the little bit of ice there including Iceland, Glaucous and lots of Great Black-backeds (and Herring and Ring-billed of course).

Next to the gulls were hundreds of diving ducks- mostly Redheads but also a nice assortment that was eerily similar to what should normally be at Presqu'ile next weekend. But what was really cool to see here was a leucistic female Redhead - she was the same size and shape as the other Redheads and actively dove for food with the others but she was almost pure white. I sexed her as a female because the bill was greyish brown, rather than the blue of a male. But as it turned out that wasn't the only weird Redhead for the day... 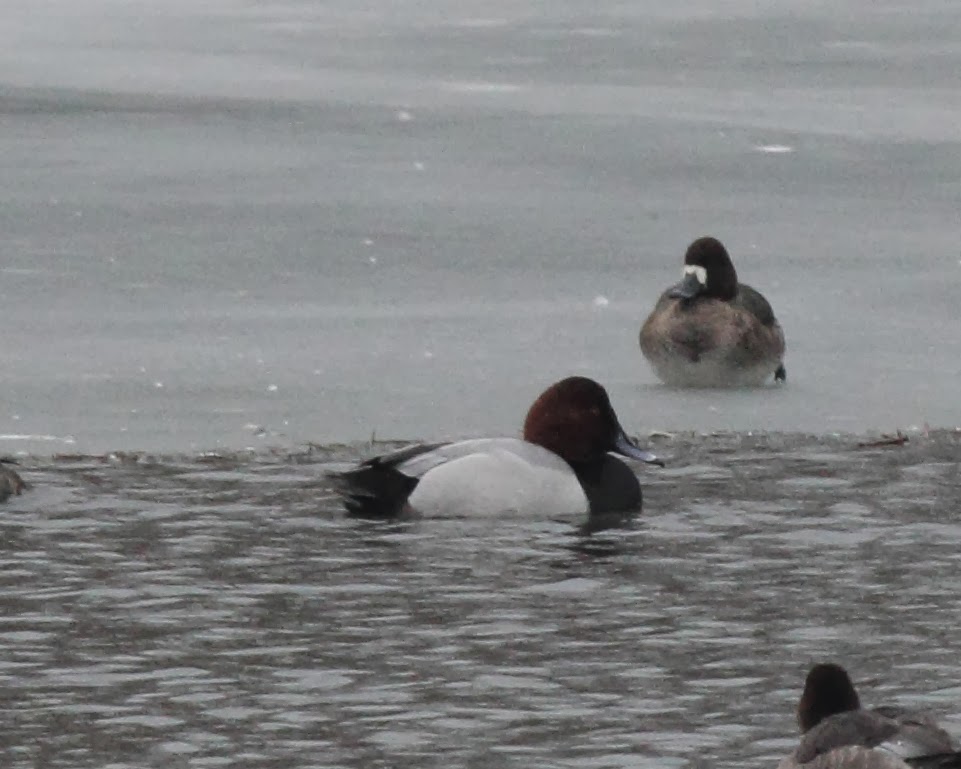 We found this bird a bit further north along the east shore of the Lake at Meyer's Point. At first glance you might pass it off as a Canvasback (which we saw several of mixed in with Redheads earlier) but there were some things wrong: the back wasn't quite white enough, the eye was yellowish orange (vs red-orange), the forehead/bill slope wasn't straight enough, and the bill was not all dark. Those points all might suggest a Common Pochard (European relative) and that's probably what I would have thought.

However I knew that a couple of weeks ago Chris Wood and Jessie Barry had found and identified a male Canvasback x Redhead hybrid at the south end of the lake on February 15, so that made things simpler (and on closer inspection a few things didn't line up). According to eBird, presumably the same bird was then seen on February 24 at the north end of Seneca Lake by David Wheeler and Jim Tarroli. Also of interest, another Canvasback x Redhead hybrid was seen on 7 and 8 March in Jackson County, Michigan by Don and Robyn Henise - I wonder how many times two of these hybrids have been seen on the same day?

There was also a similar bird in Maryland in early January this year...maybe the same bird but who knows! 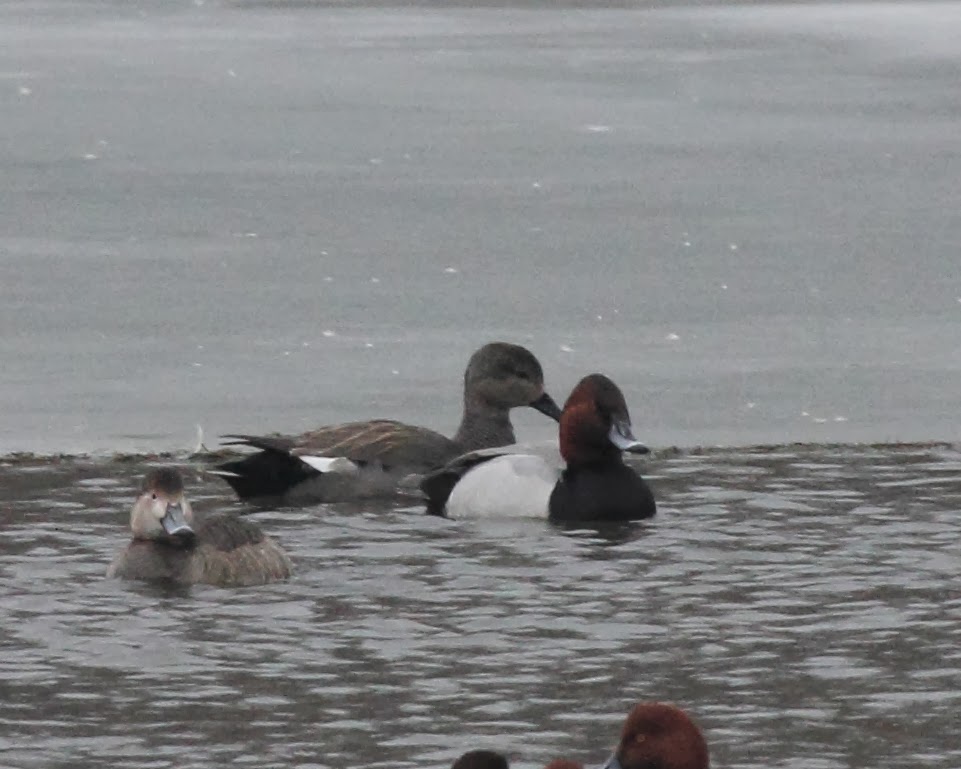 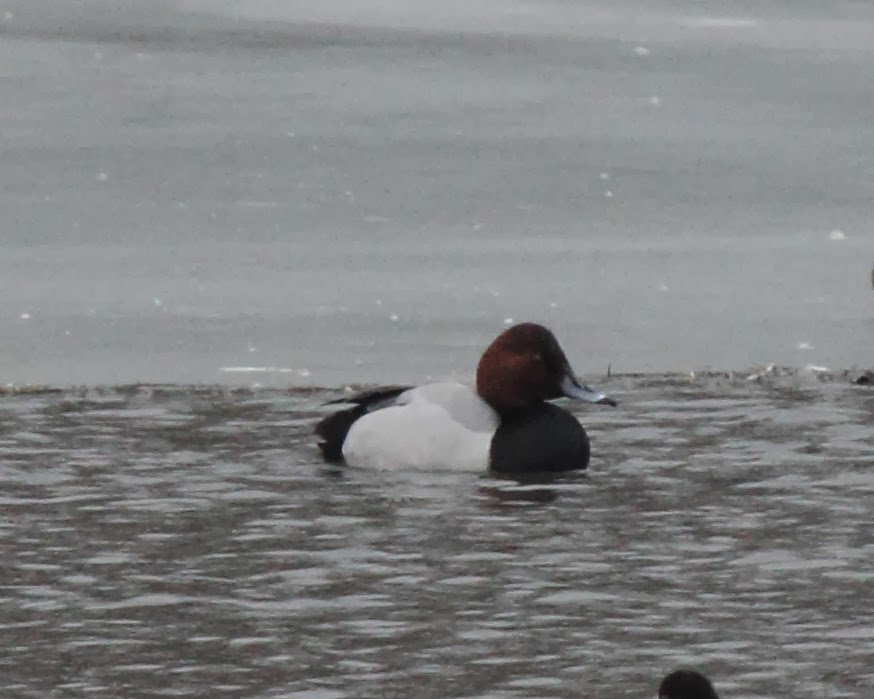 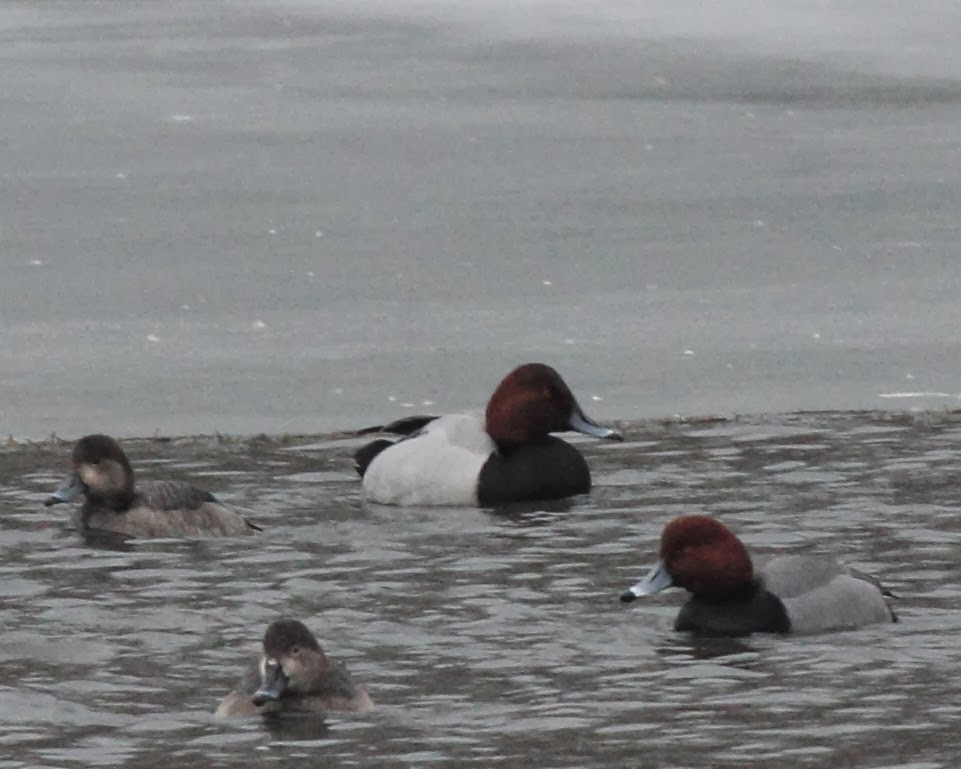 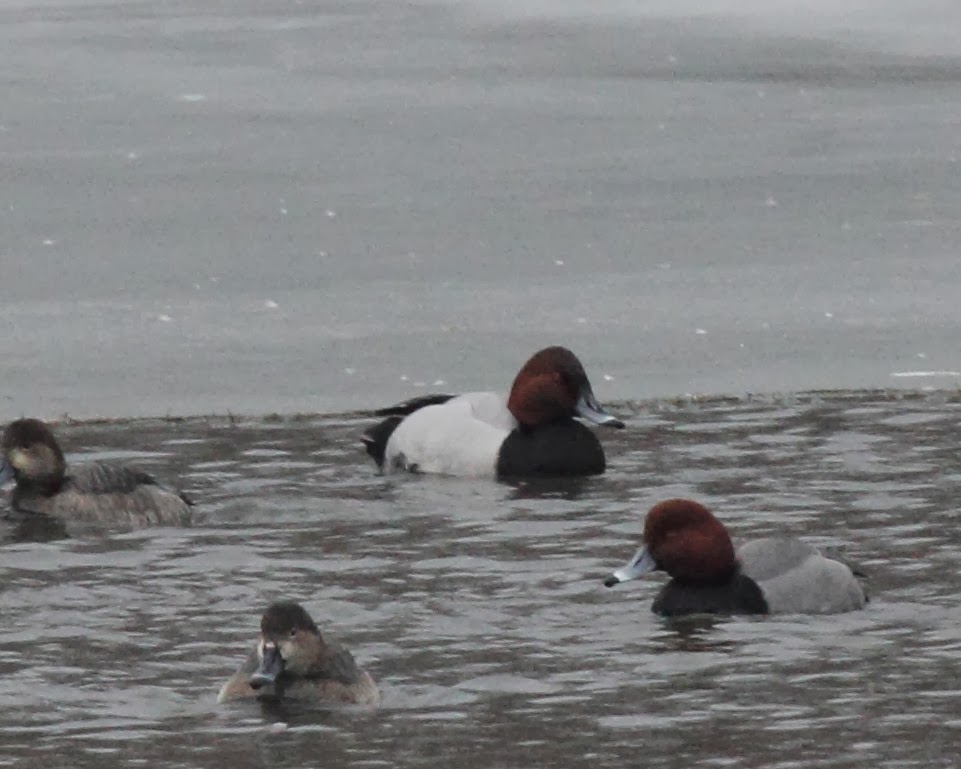 Posted by Mike Burrell at 19:00 No comments:

Well, the calendar says March 8 but you couldn't blame someone if they looked out their window and called you a liar! Brandon has been all over the medium range forecast and you'll see that we are in for more below average temperatures before being totally ready to declare spring has arrived.


That being said it IS the second week of March and the show must go on! According to spring arrival dates I calculated using eBird data, 16 species typically start making their mass arrival into Ontario this week:

I'd say however that we're probably a week behind and can more realistically expect to see some of the birds that normally arrive in the first week of March like Red-winged Blackbirds and Common Grackles. Looking at eBird we're actually not too far behind where we were last year, but well behind 2012 for those species: 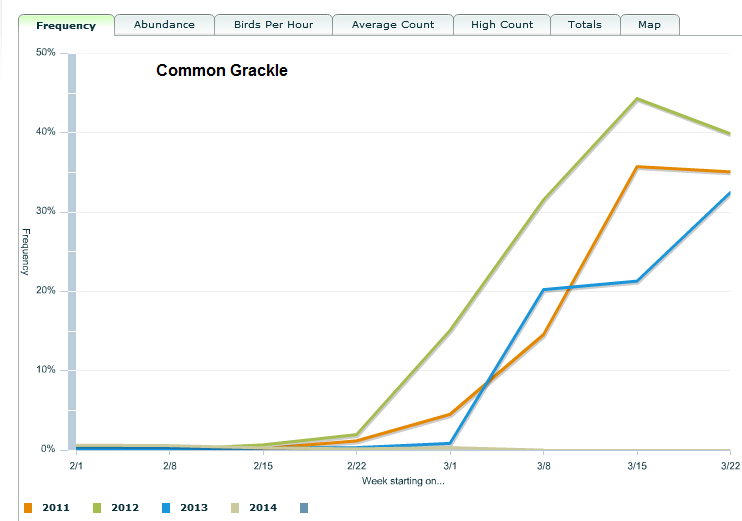 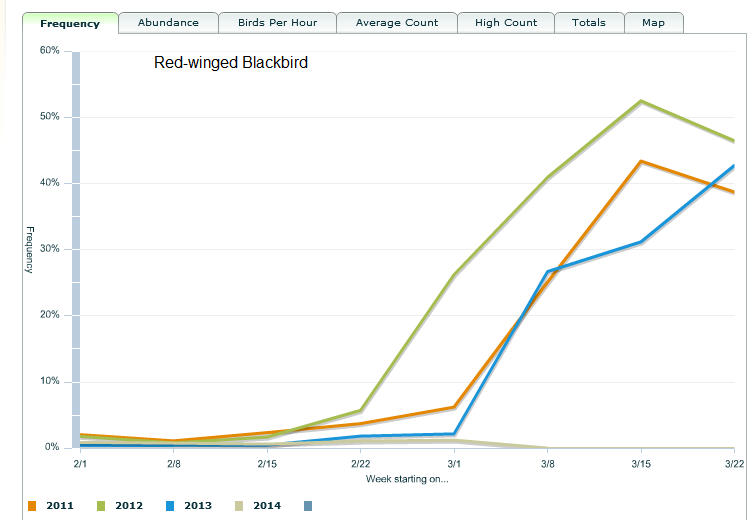 However, with spring migration things can change quickly, even yesterday with warmer (average) temperatures and a light south wind birds were moving (a couple hawks at Beamer, blackbirds along Lake Erie, an influx of robins near my house) so something should happen in the next couple days! If we ever get a real blast of warm air and south winds things could get pretty exciting pretty quickly!
Posted by Mike Burrell at 06:59 3 comments:

For the 16th consecutive year I am participating in the Baillie Birdathon, the oldest sponsored bird count in North America, raising money for bird research and conservation. As usual, I am participating on a team with my Dad and my brother. We have raised about $20,000 in that time and look forward to adding to that total this year.
If you pledge support to my Birdathon, part of that money will go to support the Long Point Bird Observatory and the great work they do. If you’d like to support the Kitchener-Waterloo Field Naturalists, please pledge money to my Dad (James Burrell). Simply click "Give Now" on my Birdathon page to make a donation or contact me directly at mike.burrell.on@gmail.com
INCENTIVES – if you pledge $100 or more I will take you birding for a day anywhere in southern Ontario (if you want to put up with me for a whole day)! And of course, everyone who pledges to support my Birdathon will get a write-up with photos of the day’s highlights. On top of these incentives, pledges over $10 get an official tax receipt for income tax purposes and pledges over $35 get a year’s subscription to Birdwatch Canada.
I’m also happy to accept per species or other creative pledges...do your worst! Some ideas for creative pledges are built in bonuses for particular species/combos or pledges per bird family; really the sky’s the limit. We usually see between 130 and 150 species during our Birdathon which we do in the Point Pelee area.
Thank you in advance for your generosity!
Posted by Mike Burrell at 09:46 1 comment:

Over the past couple of weeks I have updated a project I started a couple of years ago - a guide to spring arrival dates for Ontario birds. Check it out for a complete listing of when to expect each species coming back to Ontario over the next couple of months.

Whether or not it feels like it it's March now and that means that birds are coming! Today's warm weather and warm weather (it's all relative!!) again later this week could very well spur some migrants into southern Ontario. And don't forget things having been moving for a couple weeks now, especially crows and Horned Larks.


Anyways, check out the full list and see what you can find!
Posted by Mike Burrell at 20:35 No comments: