Erica and I had the great pleasure of joining an awesome bunch of people down in Punta Cana, Dominican Republic during the second week of January for the wedding of my good friend Brad.  We've been back for a while now but I am still way behind on emails and of course blog posts (I still have a half-written "summary of 2012" post to finish...).  Anyways, here's a few of the pictorial highlights..

We stayed at the Bavaro Princess All Suites hotel, which seemed pretty nice to us...Erica and I had been to one all inclusive before (in Cuba in 2006) and this one was much nicer.  The area around Punta Cana definitely had a more tropical feel than the area we were in in Cuba.  The hotel had pretty good grounds for birding which was good because we didn't really get off the resort too much for birds since we had lots of important stuff to do with the wedding ;)

This was pretty much the first photo I took. I was literally standing in the drop-off area of the hotel waiting to get taken to our room.  This is a Palmchat, an endemic family to Hispaniola and the national bird of the DR. It is also pretty much the most common bird everywhere we went...

In addition to the Night-Herons there was another flying creature hunting fish at the resort each night- Greater Bulldog Bats! I wasn't able to get a photo, but google them because they are pretty awesome! They were huge (about crow-sized) bats that hunt fish!! There's a wicked video I found here (I think it might be narrated by Oprah??She must be really hurting for work).

Given our location and prospective birding potential, Broad-billed Tody was my most-wanted endemic so I was quite happy to find this individual.

Other North American migrants that we saw (but I didn't photograph) on the grounds were Common Yellowthroat, Northern Waterthrush (common in mangroves), Black-and-white Warbler, and Black-throated Blue Warbler.

If you are looking for a good resource for Caribbean herps, check out Caribherp - there is a ton of information there.  Aside from the Marine Toad the the Antillean Sliders we saw lots of small lizards that I haven't tried to ID yet plus a very cool observation of a tree snake species catching a lizard one afternoon on the Paseo Ecological.  We also found a dead hatchling sea turtle one day on the beach.

It was a pretty awesome trip! On top of all the birds and other great sightings going with a big group was a lot of fun!  I also should mention an interesting story that happened during our trip to Del Este National Park on a guided tour.  After the tour our guide wanted me to talk to another guide about my camera.  It turned out he was a Dominican spider expert named Tony Tosto whose blog I had stumbled upon before the trip! He was pretty excited to hear that I had found his blog and I was excited to meet him.  So check out his blog, it has some awesome spider shots!

Of course, we ebirded the whole trip and I ended up with 60 species (about what I expected), of which 18 were lifers (higher than I expected).  I took full advantage of the ability to embed photos and videos - check out my favourite illustrated checklist here.
Posted by Mike Burrell at 20:57 12 comments:

That about sums up the Linwood CBC this year (held Sunday, December 30).  We did see lots of hawks as usual but the real story had to be the massive flocks of Redpolls we encountered during the day.  Our area ended up tallying 2097 Common Redpolls plus 5 Hoaries and a single "Greater" (rostrata) subspecies.  The latter two taxa were likely seriously under-counted since we only had good looks at about a quarter of the redpolls we saw.  Here's our full list for the day.

The best way to get this insane number across is with a photo, so here's one.  I snapped this of a portion of one of the flocks when they landed in a shrub for a few minutes.  We had the scope on them and this is how we got our Hoaries and the Greater.  There is also a Lapland Longspur in the shrub with them.  Keep in mind that this is only part of the flock and by my count there are over 500 birds in the photo!!! 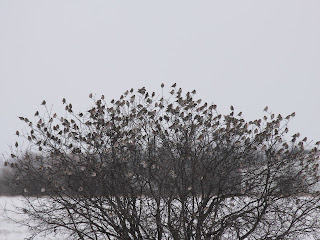 To really do the photo justice you have to view it at full resolution, so head on over to Flickr to view the big version.  I put up three different photos on Flickr - they are all pretty much the same but there are a few birds that change positions between photos.