Unless you haven't been paying attention to any birding list serves, google groups or eBird reports in the past 10 days you'll know something special is happening in Southern Ontario right now with a couple of shorebird species.

It all got kick-started last Saturday when Michael Butler found a Eurasian Dotterel. This is such a crazy bird - just a handful of North American records outside of Alaska (something like 3 California, 1 Washington, 1 Oregon, and 1 British Columbia records). This was obviously pretty exciting but there has been some really interesting other sightings that may all have their origin in the incredibly strong winds we had for several days in a row for the first few days of the month.
The main species involved is White-rumped Sandpipers. These birds breed in the high arctic, and most of them stage on James Bay from August to October before heading south-east. With some birds being tagged in James Bay over the last few years we'll soon have a better idea if these birds stop on the US east coast or if they go non-stop out over the Atlantic to South America. Regardless, what we normally see in southern Ontario are small groups (1-10 individuals) passing through Ontario in late May/early June and then again from August to early November. Don't believe me? Here's the eBird line graph:
Above is the eBird frequency graph for White-rumped Sandpipers in southern Ontario. This shows you the percentage of checklist reporting this species for each monthly quarter. You can see the spring peak in the first week of June and the fall peak in late August. That gap in late September could be just a gap in sampling effort or, may represent the gap between when adults pass through and when juveniles start showing up (in most shorebird species the adults migrate first).
In this next figure the average count is presented. In most cases, the count is in the range of 1-5 with the exception of the second week of October when it shoots up to 24. Again, this may be the difference between when adults (experienced migrators) and juveniles (less experienced) show up here.

But this October has been anything but ordinary for reports of large flocks of juvenile White-rumped Sandpipers in southern Ontario. Check out this figure:
In the above figure, I have compiled the number of reports per year (and per decade for earlier years) of flocks of White-rumped Sandpiper that contained at least 10 birds. In the past five years, we have only had 7 reports. Prior to that (admittedly when eBird data is probably far from complete), we average just under 8 reports per decade. This, year, however we already have at least 24 reports, from an impressive 17 different census divisions (AKA counties)! That's pretty remarkable.

And it's not just the number of reports that is impressive. Below is a table of the ten highest counts I could find for southern Ontario (using the following data sources: Hamilton Naturalists' Club database, Northumberland County bird database, eBird, Ontario high counts database maintained by George Bryant, and the GTA and Ontario bird records database maintained by Roy Smith).


Even if you take out some of the records that are likely the same flock on subsequent days 9 of the top 10 high counts in southern Ontario are from the last 10 days, so it is very apparent that this October really is amazing for this species here. We can speculate that these numbers have resulted from a grounding of the flocks of juvenile White-rumped Sandpipers migrating out of James Bay; maybe it was that incredible wind we had to start the month?
A similar, situation has been unfolding over this same time period with Hudsonian Godwits, which have a similar fall migration route/strategy as White-rumped Sandpipers. There have been many reports across southern Ontario during this time so perhaps they have been impacted by the same weather phenomenon as the White-rumpeds, but I'll save that analysis for someone else!

What I really love about this is it really shows the utility of using eBird to monitor and analyse bird events as they are unfolding - you don't have to wait a year until the seasonal summaries in North American Birds comes out!

I was very excited to hit two eBird milestones this past month. The first (and least exciting) was to enter my 15,000th checklist: 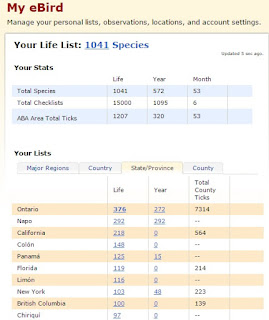 But the really fun milestone was to finally fill out my eBird barchart for my yard. Here's are a couple snapshots: 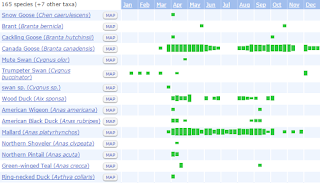 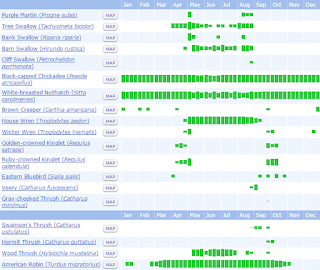 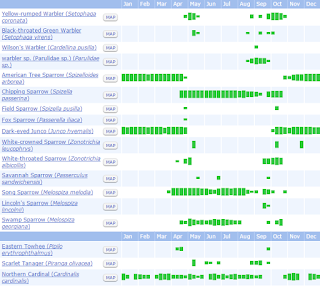 Even though we had been living at this place since December 2013 (and of course I was regularly reporting my observations to eBird) there were a couple monthly quarters that I had missed in my first year. I was able to fill those gaps with at least a single checklist on the second pass this year. The result is something anyone can accomplish by regularly reporting the birds in their backyard (or their local park or favourite trail) - it's a pretty powerful way to summarize simple data!

If you want to see the full bar chart of all 165 species I have seen on the yard so far, you can download a pdf version. I'd love to hear about your complete barchart.
Posted by Mike Burrell at 21:42 3 comments: