There seems to be more and more interest in checking out bird migration live on weather radar maps. So I thought I'd put together a short post to compile some resources.

Seeing birds on radar is not at all new, but there are lots of great websites now for viewing live radar images (or radar loops). I'd recommend everyone who is interested in birds and radar check out eBird's primer.

The short explanation is that radar shoots out a signal, and what you see on radar maps is the reflection. It's mainly used by most people to view precipitation, but when migration is heavy, birds show up too. Here's a recent image from 1 May 2019 from the (US) National Weather Service website (my favourite site for viewing radar images for the entire US): 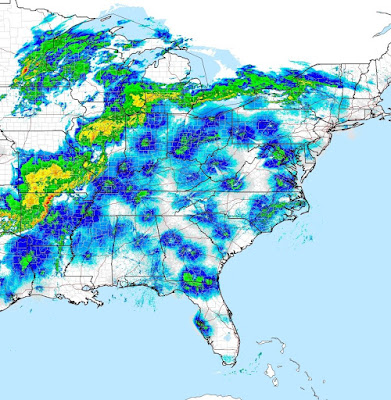 The above image is an instructive one - precipitation is showing up as blocky, irregular shapes, with very high reflectivity readings (yellows and some reds), and migrating birds are showing up virtually throughout the eastern US. Birds show up as donuts around the radar stations. This is because the radar is "shot" out at an angle, and most birds are all roughly the same height, so very close to the station no birds are getting "hit" (birds are higher), but further out, as the beam gets higher, birds are encountered. Eventually, as one travels farther away, the beam is too high and no longer reflects on any birds.

Here's a marked up version: 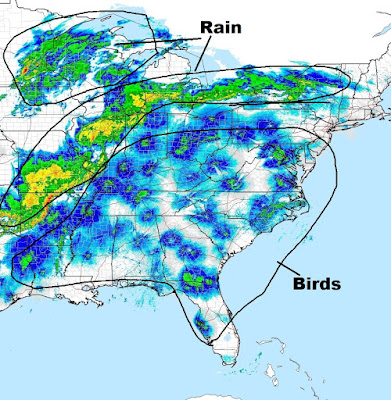 Here's a closer view of the Cleveland radar station, back from March 2014. This one comes from Weather Underground, another popular website for bird-radar enthusiasts. Note that I combined several images into a looping GIF to show the station before sunset, and then watching the birds appear in the sky:

The above image shows another characteristic of birds; the reflection increases, but doesn't appear to move. Watch the area above Detroit and you'll see a band of rain moving west to east. The birds just kind of fill the sky (some concentrations along the lake shore).

All of these images shows the reflectivity (higher reflection = brighter image = more birds), but at some weather outlets (including Weather Underground) you can also switch to view velocity, so you can see the direction and speed the birds are moving.

Now you might be wondering why I have only mentioned American radar products so far. The answer is that Canadian stations don't show bird migration very well. If you go to the Environment Canada Ontario Weather Radar page there's almost never any bird-like signals showing up, even when the American sites show heavy migration - what gives? I asked some Environment Canada staff and they told me that they do more processing of the data to eliminate weak signals (e.g. birds), and the Canadian Radar stations operate slightly different. Both give a better image if you really want to use the Radar for its intended purpose, but are bad news for birders.

the good news is that Weather Underground uses mostly unprocessed Radar data on their website, so, if for instance you want to watch for bird migration around Toronto, you can go to their website and select the King City station. If I were a betting man, I'd be betting the next two nights should show some pretty intense migration :)
Posted by Mike Burrell at 15:00 No comments: