I've been back now just about a week and have got my photos all processed and eBird checklists entered, so figured it was time to share some of my observations from Burntpoint Creek on Hudson Bay. I was at the same camp last year from June 6-22 and you can see the report from that trip here.
After being delayed in Timmins for a couple extra days due to weather (cold, rainy and some snow!) we made it as far as Moosonee late in the day on June 4.  The next morning I did a quick check of the Sewage Lagoons (picking up a nice Red-necked Phalarope) and spent some time scanning the river in front of the new MNR staffhouse where I was excited to see a flock of at least 20 Arctic Terns feeding. Then it was off for the Burntpoint Creek Research Camp.

We made a quick stop in Attawapiskat to refuel which was a new spot for me.
By noon on June 5 we were arriving at Burntpoint Creek Research Camp.  The camp was set up in the early 2000s to monitor goose nesting ecology; last year we started implementing much of the Arctic Shorebird Demographics Network protocols to monitor nesting ecology of shorebirds. The camp is located about 60 km east of Peawanuck and is set about 3 km inland from the coast on a large "7"-shaped ridge.  The surrounding land is mostly a sedge-sphagnum wetland interspersed with ponds and old beach ridges with heath-lichen tundra. Here's the location of Burntpoint Creek:

As we approached camp it became apparent that snow/ice was behind what it was last year, with some pretty big drifts and some ponds still with ice (and very thick ice to shore on the Bay).  We even had to shovel out the front door of one of the cabins before we could get in!


To go along with the snow we had a Snow Bunting in camp while we unpacked.  I saw a couple more lingering migrant Snow Buntings until June 10 - this was a species that we missed last year. 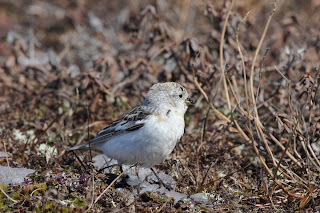 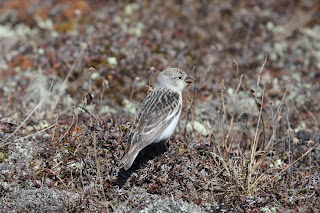 After getting mostly unpacked on the first day it was to work for the rest of the trip.  Our time was split mostly between Canada Goose nest searching and monitoring and shorebird nest searching/monitoring.  The weather this year was probably a bit cooler (most days low around 0 and highs of 5-10 C) with lots of wind but practically now precipitation - this meant that walking became easier (still wearing hip waders everywhere) on the wet tundra.  Nest searching was very successful this year with the highlights for me being 2 Smith's Longspur nests and a Red-necked Phalarope nest.  Between the group we found about 120 nests (other than Canada Geese) including almost 25 Whimbrels and 3 Hudsonian Godwits.

Insects:
Butterflies and dragonflies were a bit better this year than last for some reason (despite cooler weather).  The most common species of butterflies were Brown Elfin and Spring Azure (both seen daily on sunny days).  Also pretty common this year were Arctic Fritillary (several last year), Grizzled Skipper (none last year) and Jutta Arctic (a couple last year).  We saw Mourning Cloaks a few days and Ken Abraham photographed a Silvery Blue (none last year) one day.  On the last day of the trip I found a Red-disked Alpine near camp (none last year).  Notably absent this year were migrants - last year Ladys, Red Admirals and [Clouded] Sulphurs were all seen regularly.

Dragonflies started flying on June 13 about 4km south of camp (in a sheltered wooded ridge) but they weren't seen in the rest of the study area until June 18.  The first species seen again this year was Hudsonian Whiteface (common) but this year I actually saw more than the one species! I caught a couple Subarctic Bluets and also had Delicate Emerald.  On the last day (June 22) I photographed a female Northern/Boreal Bluet. On our way out we stopped to refuel at Peawanuck airport where I captured 2 (male and female) Whitehouse's Emeralds (lifer).
Aside from the "sexy" insects biting flies were quite tolerable - I didn't even need bug spray or a jacket at all this year thanks to the cooler weather. We did have a huge number of Collembolla (springtails) in one of our coolers one morning:

Mammals
Well, this is a really easy category to summarize....this year was even worse than last year for small mammals - we saw none!  In fact, besides Caribou we didn't see any other mammals besides a few skunks.  We did get photos of an Arctic Fox on a trail cam we set up and I am pretty sure I saw a seal at the coast on one of the last days...As for the caribou we saw them daily, with our biggest herd being a group of 61 cows and 29 calves heading east.

Flowers:
The flowers on the tundra are amazing - many were flowering while we were there but many more were still not yet flowering.  To give you an idea of the timing, Tamarack was just starting to leaf out, birch was pretty well done leafing out and the willows were just starting when we left!

Birds
Well, I saw lots of birds :) Personally, I had 86 species (79 last year).  I made it out to the coast more this year (including towards the end when the ice moved off shore, giving me some nice big scoter flocks). My new species this year were:
Cackling Goose - single bird at dusk with Canadas on June 6
Ross's Goose - pure flock of 8 white birds on June 12
American Wigeon - male in coastal ponds on June 19
Black and Surf Scoter - big mixed flock of scoters, goldeneye and mergansers at ice edge on June 20/21
Hooded Merganser - male flying over on June 22
Pectoral Sandpiper - a probable fall migrant at the coast on June 19
Red-necked Phalarope - several small flocks early on and then a male at a nest with eggs
European Starling - a single bird at camp on June 6 and 10
Bank Swallow - single bird at camp on June 19
Blackpoll Warbler - 2 singing males on June 13 (when I went further south into a more treed area)
Chipping Sparrow - Mark Peck and I found a single bird near camp on June 19 after some south winds
Hoary Redpoll - I found and photographed a male at camp on June 6 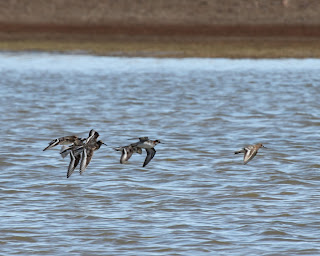 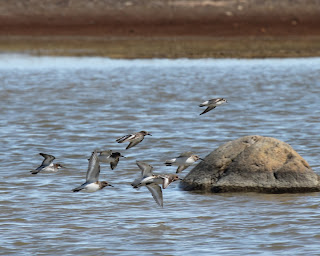 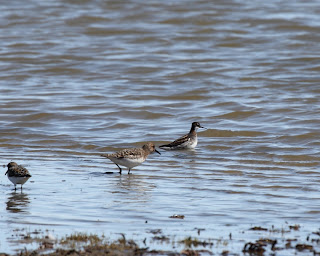 Of course, the real highlights are the common birds at Burntpoint, which gave me lots of good photo opportunities.  Willow Ptarmigans probably top that list since the birds have so much personality and are pretty approachable.  We collectively found about 5 nests, including this one, below.  The female actually hissed at Mark Peck and I when we were nearby: 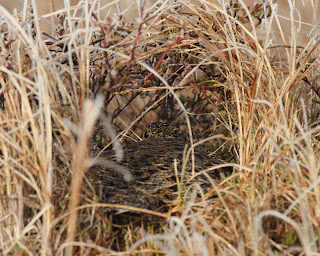 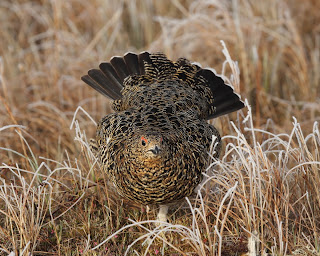 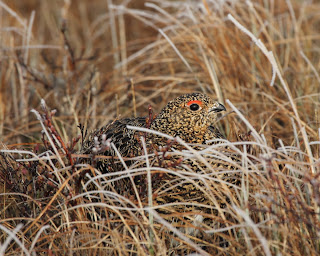 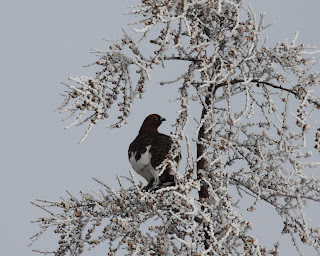 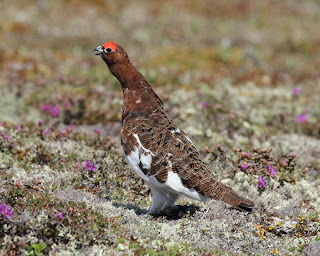 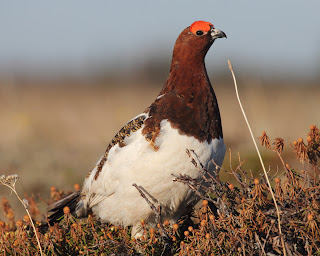 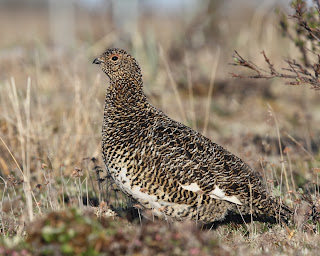 Listen closely to this video and you can hear a Red-throated Loon in the background:

Next to ptarmigans, shorebirds steal the show at Burntpoint. Whimbrels, Dunlin, Least Sandpipers, Wilson's Snipe and Hudsonian Godwits all nest in the sedge marsh/fen.  Semipalmated Plover and Killdeer appear near the coast where there is drier land. For the first week or so migrant species (Black-bellied Plover, White-rumped and Semipalmated Sandpiper, Sanderling and Ruddy Turnstone) were still moving through, mostly on the coast. 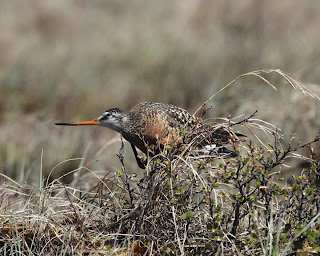 Of course, there are lots of other very cool birds at Burntpoint, including Smith's Longspurs, loons (Red-throated and Pacific breed in the study area) and Parasitic Jaegers (nest).

Despite the constant wind, the song of Smith's Longspur carries extremely well on the tundra:


Near the nest the jaegers do a very intense distraction display:

Of course, there were a few other photo highlights:
As you can see, it is an amazing part of Ontario!

Here's a summary of my eBird data: