For those of you who were birding in the fall of 2009 you'll remember that early November was pretty amazing - the Phainopepla showed up in Brampton, a Sulphur-bellied Flycatcher was found in Oakville and an Ash-throated Flycatcher showed up at Pelee (those are just the highlights that showed up during that time!).  So when a report surfaced at that time of a Brown-headed Nuthatch in Brantford you can imagine that at least a few of us got real excited...

What was even more exciting was that the finder had photographed the bird! I was one of about 30+ birders who showed up in a quiet Brantford neighbourhood the next morning hoping to find this mega.  However, after spending some time there and after Andrew Keaveney talked to the finders and we all did some investigation work, we began to become suspicious.  You can read about it on Andrew's Ontbirds post here.

Basically, what the consensus was was that the lady saw a bird in front of her house.  She looked online and found a photo of what she thought it was and posted the photo on her blog claiming it to be taken by her. Unfortunately for her, this little lie aimed at her friends and readers of her blog (which, by the way, requires a password to read now) quickly spun out of control.  Myself and several other birders emailed her to ask for detailed directions and she gladly gave them to us not wanting to admit she hadn't even taken the picture.  That's where the story ended.

Hold on a sec...I'll get to the conclusion.

So today, I noticed a post on the Ontario Birds Facebook group. Kellie Superina posted a note saying that when you do a google image search for birds now the results also give you options for similar species and in some cases different age/sex classes:
That's pretty cool I thought...I wonder when that was launched? So I tried a web search to try to figure that out.  Instead I landed on this post on the ABA Blog by Ann Nightingale. I hadn't read this post until today but the gist is that Google has this new "search by image" tool that mostly fails miserably at matching photos of things.  But what it can do is look for photos on the web that have appeared elsewhere....

So that set me on a search to see if I could find a picture of the Brown-headed Nuthatch to test with this fancy search tool.  Well, I found the photo, and what do you know? The photo first appeared in March, 2007 (two and a half years earlier than the report) on the KennySmith.org blog! Finally, we can close that mystery forever! Here's the original photo.

Anyways, that search tool definitely could be handy to screen out bogus reports of rare birds in the future.

And of course, the lesson to be learned here is that no matter how small of a lie you start with, you could quickly find your house surrounded by angry birders!
Posted by Mike Burrell at 21:08 7 comments:

It's the middle of the summer, the breeding season is coming to a close and I figured everyone is probably looking for a good bedtime read, so here you go, (sort of) fresh off the presses:

You can email me (mike.burrell.on AT gmail.com) for a pdf version if you like, or you can check out my whole masters thesis here. 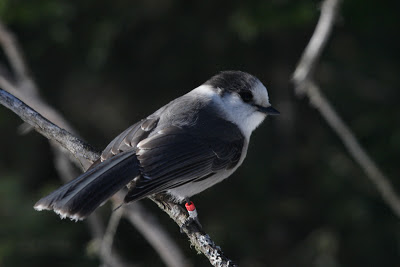