Yesterday was nice and sunny and warm, with a light SW wind.  Perfect weather for bird migration!  I was only out briefly (still a bit sick) but I saw my first migrant American Crow going north over our house (I haven't seen a crow at my house since October 13)!  On a trip to the dump I saw another American Crow, but this one had been in that general area all winter.  At the dump there was my third American Crow for the day, this one also likely a new migrant (haven't seen any there all winter).

So how does that compared to normal?  Well, I checked the eBird bar charts and came up with this: 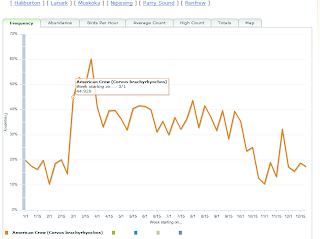 You can see that they usually make their big push into the southern shield (Haliburton, Lanark, Muskoka, Nipissing, Parry Sound, Renfrew) at the end of February and by the first week of March should be pretty widespread.

I thought I'd check how these dates compared with the other winter I spent here (2009/2010). That year my last fall sighting was October 15 (2 days later), and first spring sighting was March 3 (11 days later).

The next couple weeks should see a bunch of species starting to arrived back, which is always exciting.
Posted by Mike Burrell at 06:18