What a difference a year makes!

Last year at this time birders in southern Ontario were enjoying one of the biggest broad-scale irruptions of boreal birds we had seen for quite some time. The boreal forest had almost no food in the way of tree seed crops last year and so all of the birds that depend on those as food had to come south. That also included owls that had to move south in search of small mammal prey as their normal prey were in short supply (likely related to the poor tree seed crops).

Each fall, Ron Pittaway collects all sorts of information on  tree seed crops from a whole bunch of volunteers and puts together his now famous Winter Finch Forecast. And as usual, Ron has been pretty bang-on with his predictions this year (basically no real flight). That didn't surprise me, but what has surprised me has been just how few finches have come south. Much of this blog post is credited towards the information that is always contained in Ron's forecasts - if you haven't read the latest report I highly recommend it.

In this post I wanted to compare just how big of a difference a year can make with these birds, drawing on the instantly accessible (and free!) outputs of eBird. 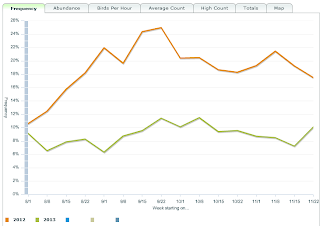 You can see that Red-breasted Nuthatches have been recorded on almost 50% fewer checklists in Ontario this fall compared to last year!

Bohemian Waxwing
Bohemian Waxwings feed mostly on Mountain Ash and other berries during the winter. According to the Winter Finch Forecast "mountain‐ash berry crops are very good to bumper from Alaska to Newfoundland and Labrador" so that means these birds have no reason to wander south. 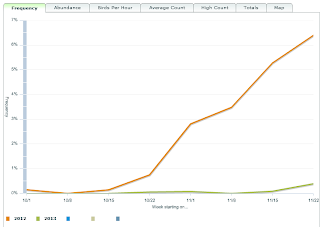 The difference here is even more striking than with Red-breasted Nuthatch - last year at this time you were 16 times more likely to see a Bohemian Waxwing in Ontario!

And here's a map showing November sightings from this year and last year:


Pine Grosbeak
Like Bohemian Waxwings, Pine Grosbeaks are tied to Mountain Ash berries, so it isn't too surprising to see the similarity in the eBird results. 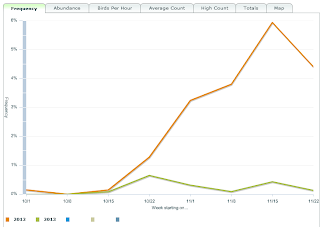 That's not quite as extreme as Bohemian Waxwing, but at their peak during the third week of November last year Pine Grosbeaks were being reported on almost 14 times the frequency of checklist compared to the same period this year.

The eBird map for November Pine Grosbeaks is also similar to Bohemian Waxwing:

Purple Finch
According to Ron Tozer, Purple Finches are the wimpiest of the winter finches, only staying north when there is so much food that nothing could possibly go wrong. 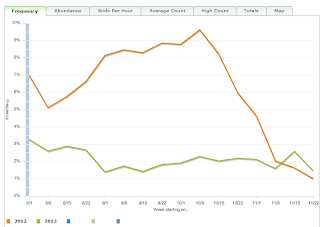 In 2012 we saw the normal spike in September and October as birds left but not so much this year. By the end of November in 2013 we are now more likely to find a Purple Finch in Ontario then the same time last year, suggesting there are more Purple Finches staying put in Ontario for the winter - this will be an interesting one to watch through the course of the winter.
Red Crossbill
Ok, I'm starting to get lazy...here's the November eBird map:

Common Redpoll
Redpolls are virtually non-existant (like most of the other finches!) this year in southern Ontario.

Here's the eBird frequency graph for the fall (October-November)" 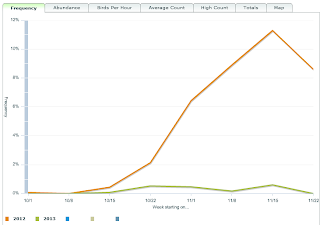 Looking at that peak during the third week of November, last year you were almost 19 times more likely to encounter a Common Redpoll during that week compared to this year!

Pine Siskin
I'm probably beginning to sound like a broken record, but the trend continues... 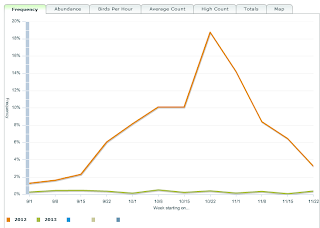 At peak migration during the last week of October you were 45 times more likely to see a Pine Siskin in 2012 compared to the same time in 2013!!!

Evening Grosbeak
Last year was a huge year for this species while this year is back to the recent average.

Here's the eBird frequency graph for the fall (October-November): 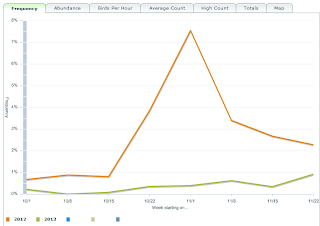 And here's the November eBird map:
And of course it's not just finches that are irruptive from year to year. Check out this map comparing this November to last November for Snowy Owls - last year the west had a big flight and it looks like it is the east's turn this year:

I think there are some neat messages here. First it is amazing how we can tie in things like tree seed crops, small mammal populations and bird irruptions. It's equally impressive the amount of information that comes in every day to eBird by thousands of volunteers to help us better understand bird distribution and abundance patterns - even a couple years ago you wouldn't have been able to get such a clear, continent-wide picture of what was happening as it happens.
Posted by Mike Burrell at 08:30